It is now the first part of April and the drivers are ready, the crews are ready, the tracks are ready, and so are the fans. Just can’t wait for the smell of racing fuel and hot rubber from the tires. The smell of a race track hot dog and pop corn are just a few weeks away. Don’t know about you but I am ready.

Motor City Motorsports returns for the 26th season on Wednesday April 7th 2004 at 7:00pm on WLQV 1500AM with its host Vito LoPiccolo. Vito’s first guest of the season will be yours truly and Eddie Sachs Jr. so tune in and give a listen through out the 2004 season.

Here’s to a safe and fun filled 2004 racing season here in Michigan and across the country.

Our March meeting had three special guest speakers on hand with lots of information to be heard.

First up was the Promoter of S.O.D. Sprints Jason Fausey who informed us on the 35-race schedule the series has for the 2004 season and the vast driver entries also. Jason thanked the club for honoring the S.O.D. Champion at our banquet this past January and with that introduced his champion Dustin Daggett. 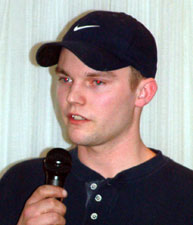 Dustin told us that he has been racing since he was 16 years old in the sprints. He said that his team was owned by his family and they have been his biggest supporters through out his career. Justin also said that given the chance that he would like to drive a late model or ARCA car in the future. “Poor” Paul Zimmerman was also on hand but chose to let Jim Leisure speak about both Spartan & Calhoun County Speedway’s. 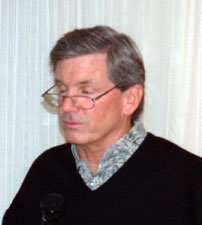 Jim told us of all the work that is going on at Calhoun with new fencing, stands, pit slabs and concession stands. They are going to be improving the track as they go along during the season. At Spartan most thing will stay the same but will host a few special showing during the season like faster pastor races and a school bus figure “8” race. Hope Paul has that night off his great green grass is sure to get a little messed up.