From the entire board of Directors & me we wish you all a wonderful and delightful holiday season. May you get all the things that you ask Santa for on your Christmas list. We must also remember all our service men & women who make it possible to continue to celebrate this joyous season as free individuals. Please take a minute each day and thank the good Lord for all we have and pray for peace in the near future. Once again “Merry Christmas & a Happy New Year to you all” See you at the races in 2007! 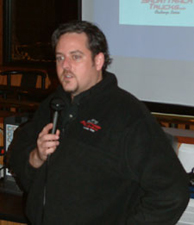 With a great crowed on hand at our November general meeting at Capers Restaurant our first guest speaker for the evening was Cary Cole Promoter of the Short Track Trucks.Com Challenge Series. Cary had a great presentation with a slide show that informed us of how his series started and where it is heading in the future. He also talked about how some of the younger drivers from the go-kart & quarter midget series have moved up to run in his series and they are doing a great job each and every week. 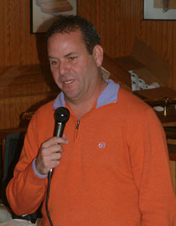 Next up we had Eddie Sachs Jr. who spoke about how his first season as the new host of Motor City Motor Sports went. Eddie said he is working hard at getting the show on the web cast deal as well as getting it broad cast in the Metro Detroit area and not just in the Flint area like it is now. We wish him luck for his next season. Dennis Worden from MIS was scheduled to be with us but was sent at the late minute by the speedway to get things set up for the last race at Homestead. Dennis hopes to be able to be with us at one of our spring meetings soon. 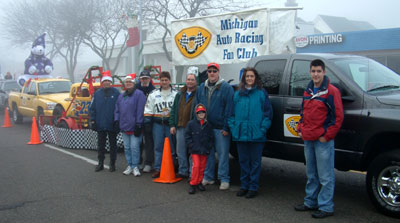 MARFC was excited about being invited once again to participate in the annual Mt. Clemens Christmas Parade held on the Friday after Thanksgiving. Even with the heavy fog that set in early Friday morning that went away just as the parade was to start we all had a grand time. Special thanks to Frank Jiovani and his family for bringing his Michigan Legends car and displaying it during the parade. Thanks also to the Michon Family for the use of their truck to hall the giant polar bear we had. We look forward to returning again next year.