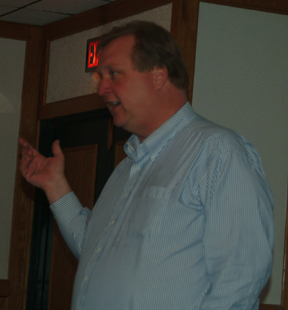 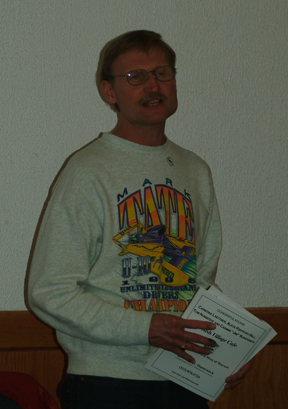 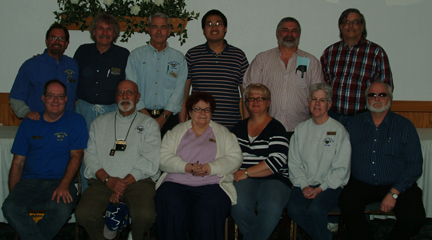 Our last general meeting of the winter months was held at the DeCarlo’s Banquet Center with attendance of 25 people. Our first guest speaker was Terry Fitzwater the owner/publisher of the Midwest Racing Scene. Many of you will remember Terry from the Michigan Racing Scene as that is the paper that started Terry out in the world of Motor Sports Publication. Terry sold that paper off when he moved to Arizona but now that Terry has returned to Michigan, He is starting out a new venture with the Midwest Racing Scene. Terry shared the particulars of the paper and how it will cover not only Michigan but large portions of Ohio and Indiana as well, truly making it a Midwest publication. Not only will Terry offer the Midwest Racing Scene in print form at $40.00 per year and $2.00 per copy but it will be offered as an internet only subscription at a reduced rate of $25.00 per year. The Printed subscription will automatically give you an internet subscription as well while MARFC members will receive an introductory rate of $25.00 until May 15 on the print subscription with 10 % discount after that on the printed subscription only. Terry also shared with the group how He got started in the newspaper business and just what he has been up to these past couple of years. Terry and the Midwest racing Scene will also continue on in presenting the “Driver of the Year” and the “Tom Carnegie Announcer of the Year” awards at our annual MARFC Dinner Dance and Awards Banquet held every January. If you have any questions you can contact Terry at terryjames@broadstripe.net

Next up was club Member Ed Krupinski who shared with the club that Michigan Motor Sports Hall of Fame inductee Tom D’Eath is being inducted into the National Polish-American Sports Hall of Fame. Tom will be joining the late Alan Kulwicki as the only other racer to be inducted into this Hall of Fame. While many of us know Tom D’Eath for his prowess in the cockpit of an un-limited hydroplane, the truth is that Tom was also a racer on land as well. Tom drove USAC Super Vees from 1977-1981 and USAC Midgets from 1982-1991 and ended his driving career as a result of injuries while driving a stock car at the Charlotte Motor Speedway. The induction ceremony will be at the American Polish Cultural Center in Troy on Thursday June 23, 2011. Tickets are $85.00. You can contact Dave DeHem at president@marfc.org for more information.

Our Bi-Annual elections for our Executive Board and Board of Directors were held at the meeting as well and with only enough nominees to fill the positions available the nominations will stand and there will be no election needed. I will continue on as President while Wild Bill Barnhart and Sue Ginter will continue on as Vice-President and Secretary/Treasurer, respectively. We welcome three new Board members as Jeff Horan will become the third generation of the Horan family to sit on the board as his Father Chuck remains and his Grand-Father Pat had sat on the board for many years. Dennis Trinklien and Dennis Schalm will now serve as board members. Dennis Trinklien is a past MARFC Fan of the Year and sits on the Michigan Motor Sports Hall of Fame Board of Directors as well. Dennis Schalm has had a long history in local and national racing not only as an ARCA Official but as one of the leading race car lettering artists in the Midwest. Returning board members are Fran Russo, Cory Russell, Larry Iacoboni, Bill Walters, and the previously mentioned Chuck Horan. This new Board will take effect on June 1, 2011 and will remain in place until June 1, 2013. I wish to say Thank You to departing Board members Laura Tucker, Jeff Moroni, and Al Peltier for their many years of service as well as their contributions to making this club what it is today.