We here at MARFC send our thoughts & prayers to long time member Steve Lee and his family for the loss of Steve’s father Wayne. Wayne was the first in the family to get started racing and with his support both Steve and his son Eric have gone on to win Championships over the years. MARFC has also lost one of it long time members from the Erie Pennsylvania area Lewis Butler.
Lew passed away on June 14, 2006 he had always supported our club even though he was living in PA. He had attended the Indy 500 for over 50 years and always attended our Annual Convention as a MARFC member. Both Lew and Wayne will be truly missed by all who know and meet them. “God’s Speed” to you both.

Just a quick message from Vito LoPiccolo. Vito wishes to send his gratitude to all those who called or send cards while he was very sick these passed several weeks. He said that he is doing a 100% better now and will be able to get back to traveling soon. Once again from Vito & Barbara they THANK YOU ALL!

Also hearing that Arlene Stone is doing much better and things are looking up. See what the power of good thoughts and prayers can do. We can still use some more volunteers to help out with the remaining Fan Club Days events. If you can be there to help out please let me know ASAP. I Thank those of you that have helped out already this year and Thank You to those who will be helping soon. Supporting our club is what makes it grow and keeps it the best club in the country. As always any questions or comments, contact me at president@marfc.org.

NAARFC REPORT:  Better late than never…The 54th Annual National Fan Club Convention went off with a great crowed again this year. MARFC was well represented and one of our own long time charter members was awarded the top award from the National. George Adastik was given the Presidents Award for 2006 by NAARFC President Lee Holst for attending his 64th Inday 500. The National Hall of Fame inducted Gary Bettenhausen and Bob Jenkins this year. Eddie Sachs Jr. presented Gary Bettenhausen his award. Once again MARFC was able to best all the other clubs with our patron page. Many thanks to all of you who made it possiable to make this happen again this year. Thank You all for helping support our National Fan Club through your support of our club. Looking forward to the 55th Annual Convention. Thanks Again to all!

After a brief rain shower and “Big” Ed saying that we brought it with us (HA HA!) The sun came out and it was a great night of racing. “Poor” Paul made a grand entrance to start the night off in the back of a Hurst and popped out of a coffin to say he was back as lead man at the speedway. Paul sure knows how to make the fans go wild. Jim Barker long time scoring tower worker at Spartan and who never has missed a show was presented our MARFC/Uniform Helmet Bag. Thanks to “Big Ed”, Bill, and all the staff at Spartan for making our evening outstanding. Volunteers at our MARFC table were Doug Jakeway, Larry & Kenny Letts, and our VP Larry Iacoboni as Dennis Trinklein and others stopped by to say Hi! 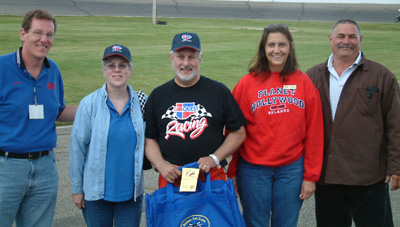 Rain tried again to spoil the evening again but the Springport Staff pushed the show along. The MARFC/Uniform Helmet Bag was given to Dan Logan Modified driver who helps support racing along with his sponsor Car Quest Auto Parts for the night. Many Thanks go out to Paul Zimmerman and all the staff of the speedway for everything.

Great weather with no rain in sight. The Pit area was packed with cars and what great racing took place. Late Model #6 driver Derek Didone was awarded our MARFC/Uniform HelmetBag because he commutes each week with a 5 hour plus drive from Canada and has not missed a night of racing. Is that commitment or what? Thanks to Ralph & Carol Warning and the staff for bringing the Speedway back to our club. 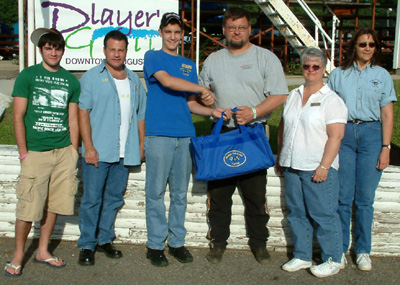 Once again fantastic weather on hand and a full field of cars in the pit area. Sportsman driver # 76 Jim Woodin was chosen to receive our MARFC/Uniform Helmet bag for his support of the speedway for racing there since 1990 in many divisions. Many thanks again to Ralph Warning and crew for the great opportunity to visit his facility. 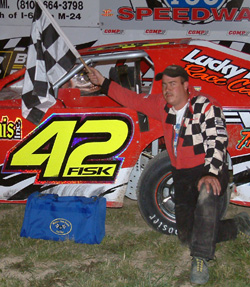 Our first trip to this speedway was great with a large field of cars made for some good dirt track racing. Our VP Larry Iacoboni had a grand time at his first dirt racing encounter. Dave DeHem, Larry and I presented the winner of the modified feature Sean Fisk with our MARFC Uniform/Helmet Bag. Many thanks to Mike Mouch and staff for having us and we can’t wait till next years event.

Once again nice weather was upon us as we visited Ron Flinn’s fantastic racing facility. Pro Stock # 34 driver Matt Sullivan was chosen to receive our MARFC Uniform/Helmet Bag for the evening because he along with his sponsor Alma Glass & Lock are great supporters of the track and Matt is an outstanding driver in his division. Thanks to “Dirt Talker” Roger Williams for his support of our club and to Ron Flinn for all of his continued support also.