It is hard to believe that the racing season is soon coming to a close. Just seems like we just got started. Many thanks to all those who lent a helping hand at all out fan club days events this season. Special thanks to all you members who came out to support our club and to support our sport that we all love so much. We must remember that without the fans that show up each & every week the tracks in the area would not be able to survive and they would close for good. It is up to us to help the tracks keep open and let them know we support them 100%. To all of our membership track and others across the state of Michigan thank you for all you do for the fans as well as the racers. 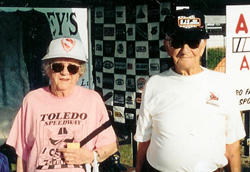 Thoughts & Prayers are needed for long time MARFC members Clyde & Hermina Wright. Hermina in very ill and has been in a nursing home for the last few months and Clyde just turned 90 years old and is having a hard time getting around these days. They have been MARFC members since 1975 and have attended many club functions of the years. Clyde & Hermina our Prayers are with you always!

Just a reminder that our fan club day event at the Michigan International Speedway on August 18, 2006 you must go to the ticket office at GATE # 24 and show your membership card to get a hard ticket to get into the speedway for the day. Remember Gate # 24 at MIS ticket office. As always any questions or comments contact me Bill Barnhart at: president@marfc.org.

The Racing World has lost a great friend this week. Greg Yost track announcer, radio talk show host and racing historian passed away Tuesday evening as a result of a fall. Just less than a year ago Greg had a similar fall and broke his leg very badly. As a result he was side lined from his duties this season, as one of the track announcers at the Auto City Speedway, as well as hosting his radio show on Sunday mornings. Greg was a proud member of our club for many years and supported us when ever and where ever possible. His skills as a track announcer was outstanding from the time I first met him, at the Owosso Speedway right on through his time at both the Spartan & Auto City Speedways.

His knowledge of our sport was so large that I believe no one person knew just how much Greg knew. As a sports writer for various racing papers his stories had whit, humor, and facts as well as a message. Love him or hate him he was one of a kind and he will be missed by all who knew and met him. It was my honor to present him with our MARFC Electronic Media Award at our banquet back in January 2005. It was fantastic to see him return for his first outing to our banquet again in January 2006 after is fall and surgery.

We just don’t know what plans God has for all of us and now Greg is working on the plans God has had for him as he stands as God’s side now. Our thoughts and prayers are with Greg family at this time. “May God Bless & Keep You Always & Forever!”

Funeral arrangements are as follows: 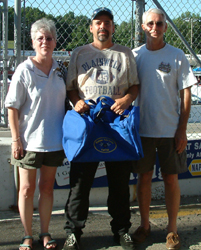 KALAMAZOO SPEEDWAY: Hot & dry weather on hand for an excellent night of racing at the Kalamazoo Speedway. Board members Bill Walters and Sue Ginter were on hand along with Rich Walters to greet all the members who attended the evening events. The MARFC Uniform/Helmet Bag was presented to Limited Late Model # 6 driver Tom Wright who accepted the bag on behalf of his car owner Harry Try. Harry has been a long time supporter of racing and was recently diagnosed with cancer and has just returned home from surgery. Tom was very appreciative and the crowd gave Harry a large ovation. Thanks to Gary & Donna Howe for an outstanding night of racing. 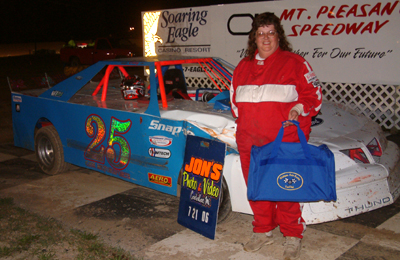 MT. PLEASANT SPEEDWAY: What a great night for racing weather was just a little overcast but cooler. With well over 100 cars in the pit area the racing was fantastic. Club members Larry & Kenny Letts along with Scott Fow and I were on hand to greet all the members who spotted by to say Hi. Mini Stock # 25 driver Cindy Malcolm was chosen to receive our MARFC Uniform/ Helmet Bag for her racing commitment. She has been there every week this season and is a big supporter of her division at the speedway. Special thank you to Betty Crook and all the staff at the speedway for a great time.

MERRITT SPEEDWAY: With threatening rain & cool temps in the area there were just a few drops at the speedway but the show went on as scheduled. There was great racing in all divisions. Board member Bill Walters along with members Larry Letts were present to help sign up our new members. The “Chief Leo Pego was surprised when he was selected to receive out MARFC Uniform/Helmet bag for his dedication as the track announcer for many years.
To Rod Ancel & the Merritt Speedway staff thanks having us again this year.

2006 MARFC PICNIC:  For those of you who didn’t make it to the 3rd Annual MARFC Family Picnic you all missed out big time. Lots of food & drinks and the weather was just fantastic. Many games were played and prizes were won by almost everyone. All who attended received a MARFC can koozie and soft sided cooler. I wish to thank all those who brought a dish to pass and those who donated prizes and helped out setting up, cleaning up and organizing the games. Many thanks to our VP Larry Iacoboni who was our chief cook for the day. Looking forward the 4th Annual Picnic in 2007. 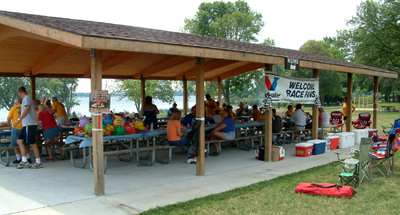 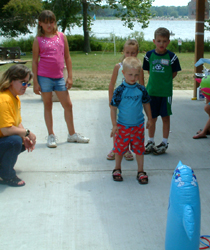 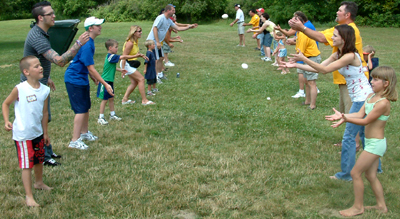