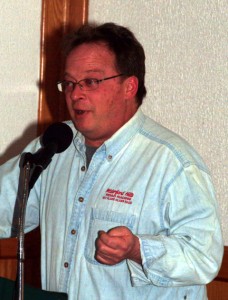 Our February meeting was held on the 23rd at the DeCarlos Banquet Center. First up was Joel Hershoren of Waterford Hills Raceway located off of Sashabaw Road in Oakland County. Joel shared his passion for motorsports and for the last remaining race track in Oakland County, Waterford Hills. Joel shared the history of not only the race track but also his history with the track going back to his Dad taking him and his brother to the track way back in 1968, which started his love of road racing and the Waterford Hills circuit. Not many know this but Waterford Hills is the most demanding road course in the country with its 1 ½ mile length featuring 13 turns and 6 elevation changes. Joel also shared how fan friendly the track is and that from nearly every viewing area, one can see 85–90% of the race track and in only one area the track visibility is about 60% which is the best of every road course in the country which really makes it feel like a short track to all of us oval track fans. Waterford does have sound restrictions on its race cars as it needs to co-exist with the suburban area that has built itself up to nearly the edge of the race track in a few areas but even with the 70 decibel limit, it provides for some fantastic racing action. The club will have its fan club day there in July during the Vintage Racing Weekend which is Waterford’s biggest event of the year.  Joel also spoke a bit about the quarter midget track that is also located on the grounds which has churned out many of our top racers today not only at the local level but on a national level as well.    Next up were the promotional team of Rick and Jennie Miracle, promoters of the Owosso Speedway located between Owosso and Ovid on M-21. Rick and Jennie have been at the helm of the speedway for the past five years and are now headed into the sixth year of promotion and management at this historic venue. Rick and Jennie spoke about how when they took over the speedway it was literally on life support with only about 25 cars in the 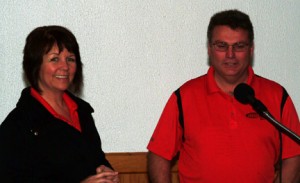 pits and less than 300 spectators in the stands. Finishing up the 2012 season they were averaging 79 cars in the pits for a regular night and just over 850 spectators in the stands. Still small numbers when compared to what we used to see at ALL tracks in the 80’s but for these days, that is a respectable number and shows how people will come out and support a speedway when the promoters put family values along with consistent and fair teching in the forefront along with some great racing. Rick and Jennie shared how these days when promoting a racing venue it is so very important to not only be a good neighbor but to also get to know the area, the township in which the track is located and work to become an integral part of that community and while it has taken time, they have been able to accomplish that goal and while they had some very tough times in 2012, they were able to continue on with much support from the racers and the racing community and will be there in 2013. The schedule for Owosso Speedway is still in the hands of the city council awaiting approval but should be out very soon and early indications are for some very good racing and a few specials along with “The Nationals” which last season saw 150 racing machines in the pits ready for action. (Above: Joel Hershoren Below: Jennie & Rick Miracle)