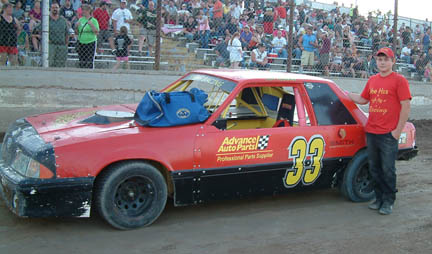 The Prez. Made the trip to the west side of the state for another night of exceptional dirt track racing at Tom and Lois Sprague’s Winston Speedway this past July 29th. The SOD Sprints were on hand and they did not disappoint anybody in attendance. Wow is all I can say. Not only did the sprinters put on a great show but the modified division had a larger than normal field as Renegade Racing Fuels and club member Barry Marlowe had added additional sponsorship to the night’s events. Cody Moorman, driver of the #33 four cylinder was the MARFC Helmet Bag recipient.

Cody has been racing at Winston for five years and is looking to move up to a modified as his next step. Cody worked hard to gain positions this night but racing luck just kept him further back in the pack than he would have liked. It was a joy watching him work the traffic though and he has a bright future ahead of him. Mike Berck took a vacation to Silver Lake so he could take in the races and was our winner of the MARFC Member Raffle prize. Thanks again to The Sprague’s and the staff of the speedway for having us out to the Winston Speedway in Rothbury.