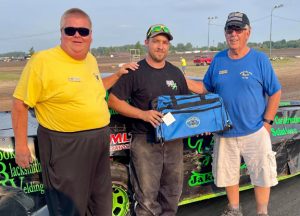 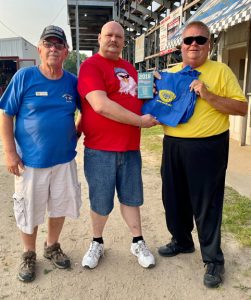 The rain stayed away for our July 23rd fan club night at Mount Pleasant Speedway. Thanks to promoter Betty Crook and the staff for the hospitality and announcer Leo for the kind words. Congratulations to Jake Guild Sportsman # 30 who was given our MARFC/Uniform Helmet Bag for his all-around good attitude in racing. MARFC Members raffle was won by a new member who just joined that evening, Thomas DeBoer. Working the table were David and Eldora Howe and John Jackson. Report provided by VP John Jackson. (Photo Left: David Howe, Jake Guild, and John Jackson) 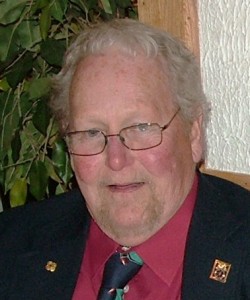 We here at MARFC are very saddened by the news of the passing of longtime member and former Board of Directors member Barry Meschke who has taken his final checkered flag in life. Barry was always willing to help support the club when ever he could. For many years he helped out at MARFC events working at our table. He was also the recipient of our MARFC Fan of The Year Award back in 2012. Always with a smile and his hand out to say hello he will truly be missed not only by his friends here at the club, but all his racing family at all the tracks his attended for many years. He was immensely proud to be a veteran and served his county with honor. Our deepest sympathies to his family. “God Bless” My Friend Until We Meet Again! 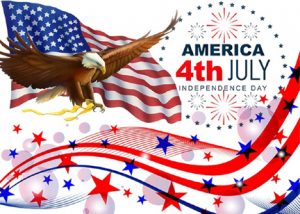 From all of us here at MARFC we send out to all our members the wish that you have the greatest of 4th of July holiday weekend. May your time with family and friends be happy and safe. Enjoy the day and reflect on how it can about. What our forefathers did and sacrificed to make what we enjoy doing free. Remember all those who made it happen and always never forget that freedom is not free, and it came at a cost. Be thankful to all those who made this happen over 245 years ago. May you all be blessed on this great day! Stay safe and cherish the time you can spend with all you love. 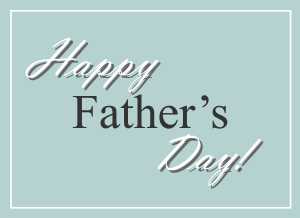 To All MARFC Fathers! We here at MARFC are sending out to all our members who are Dad’s we just wanted to tell you all to have the most outstanding and wonderful Father’s Day you could possibly have. Enjoy the day with your family and be safe. We also would ask for those who fathers are no longer with us take the time to remember all the good things you did and seen together. Let your sons and daughters know that their grandfather was fabulous & loving person in your life, and you are working to be the same in theirs. God Bless You All! Bill Barnhart MARFC President