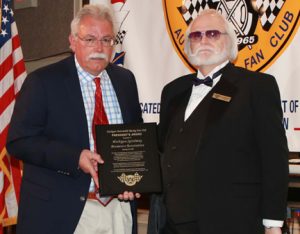 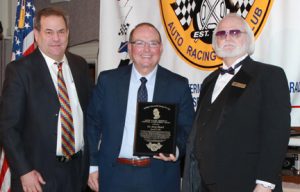 2022 ANNUAL BANQUET REPORT: What a night for all who came out the enjoy & honor all the champions from across our state. We honored 130 champions from all different divisions of auto racing. We opened to evening with the national anthem followed by a moment of silence for those who we lost in the last couple of years. Then after a fantastic dinner provided by the good folks of Zuccaro’s it won on to the awards. “Shut Up” Roger Williams did an outstanding job with all the champions and entertained the crowd with his quick whit and humor. Our top awards were then next on tap! Jamie Little could not be with us but, sent us a great acceptance video thanking MARFC for her Special Achievement Award. Our MARFC Media Award was then presented to Zack Heiser & Rich Frantz from “HorsePower Happenings” for all their magnificent work on their pod casts keeping race fans up to date with all the happenings during the racing season. We had two presentations of our MARFC/Vito LoPiccolo Memorial Contribution to Motorsports Award. Claude Plante was on hand to accept it on behalf of Drive Train Specialists for all they have done in sponsorship at many various racing venues across the state. Then Ron Flinn promoter of the Crystal Motor Speedway was honored for his 40 plus years of promoting racing not only at Crystal but other racing facilities before he purchased Crystal. He is a fan favorite with his entertaining ways on and off the track. Eddie Sachs Jr. presented Dr. Jerry Punch with the MARFC/Eddie Sachs Memorial Lifetime Achievement Award for his dedication of our sport as a broadcast journalist over a span of 30 plus years. Dr. Punch was honored with the award and had much to say about the local grass roots racing here in Michigan and across the country. Then Ron Drager President of the Michigan Speedways Promoters Association was grateful to accept our MARFC President’s Award. He then had all the promoters in attendance come together for a group photo and said this award is for all the promotors that are part of the organization. Our Surprise & Special awards are listed below and all the recipients we very thankful for receiving them. Just wanted to give a Special Thanks to George & Mark Rangel for sponsoring our program printing & door prizes. Blue Water Compressor Service & Blue Wate Pipe & Supply. Also, a big Thanks to Rand Thompson for all the great photo’s taken during the banquet! The banquet could not have been put together without all the Banquet Helpers who came in early to set up and those who helped pack up afterwards and they were: Bill & Linda Walers, Chuck & Jeff Horan, Nancy May, Rand Thompson, Rob & Lisa Michon, Kelly & Mistelle Hollister, John & Darlene Kryta, Eric & Staci & Kamille Fitzpatrick, Dave DeHem, John Jackso, Spencer Nelson & Karl Zarbo. (Photo Top Left: MSPA President Ron Drager & MARFC President Bill Barnhart) (Photo Top Right: Eddie Sachs Jr. Dr. Jerry Punch & Bill Barnhart) other photos will be posted on our web site soon! 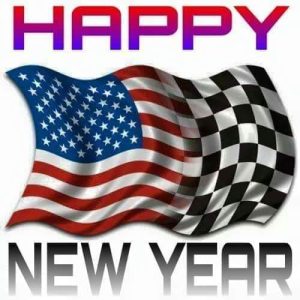 “Happy New Year” to all our MARFC members! Here’s to hoping that Santa did bring all the racing items needed for the race car. As we start this new year, please take a moment to remember those who are serving our county here and home and abroad as without them we could not enjoy this holiday. Pray that they all get home safely soon. May the new year bring us all safe & healthy!

Again, you all have a Blessed New Year! 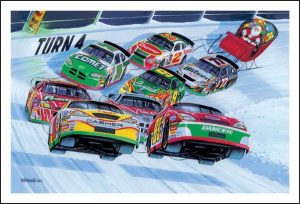 To All MARFC members: May you all be blessed this Christmas with love, warmth & happiness! May your day be filled with all your family and friends enjoying the fellowship together. Hoping Santa brings each and every one all the toys they need to go racing in 2022. Remember if you cannot be with loved ones this day take the time to give them a call as family is the most important thing of all. Take the time to remember those who have gone on the Lord’s home as memories are always cherished here & now. May the Lord Bless & Keep Us all today and all throughout the coming year.

“Christmas Blessing to All” 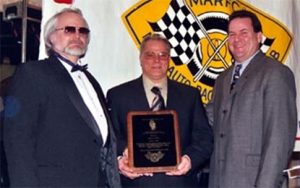 e here at MARFC are very saddened to hear about the passing of one of Michigan’s Legendary racers Bob Keselowski. His was an outstanding person on and off the track. Soft spoken and very approachable for anyone who wanted to stop and talk to him anytime. I personally remember Bob from the old days at the Mt. Clemens Race Track and he was always great to talk to. He was gracious enough to let us into his race shop when it was here in Michigan to hold a tour and a MARFC meeting. We presented him with the MARFC/Eddie Sachs Memorial Lifetime Achievement Award back in 2004 at our banquet. Our thoughts & prayers are with the Keselowski family. “Rest Well” until we meet again in the Lord’s house. (Photo above: Bill Barnhart, Bob Keselowski & Eddie Sachs Jr.)