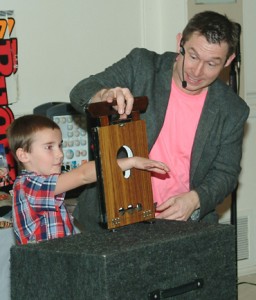 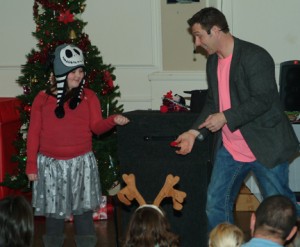 Another fantastic day for our Annual Children’s Christmas Party! All the kid’s young & old were treated to lunch while balloon sculptures were made for all the kid’s and then we held the kid’s door prize raffle and everyone won a great prize. Then “Barry the Great” stopped in for a great magic show. And then a few of the kid’s helped President Bill Barnhart lead all in attendance sing in Santa with some Christmas songs and it worked as Santa found his way to the hall and meet all the kid’s giving each of them a gift. Many Thanks to all who donated to make this an outstanding event for the kid’s and the family we were able to help out with our non-perishable food items that we collected. Special thanks to Jimmy Gullett for the donation of all the food for the luncheon and a bit thanks to Barb Gullett who chaired the event again this year and did a great job. To all who helped out set up and take down for the party I say a Big Thank You to you all!(Top Photo: Barry the Great with his helpers)(Bottom Photos: MARFC Board of Directors with Santa) 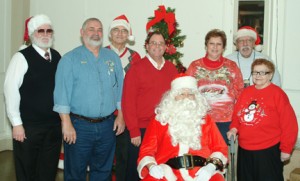 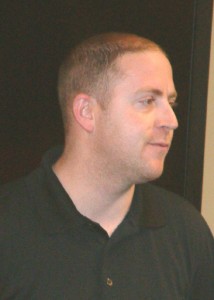 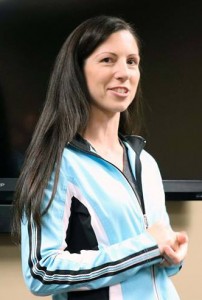 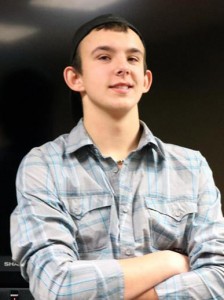 Full house of fans and racers for our meeting at JDKarting in Novi. Our guest speakers for the night were 2014 Flat Rock Speedway Late Model Champion Steve Cronenwett Jr. who told us about growing up as a third generation racer and everything he learned from his family to be able to win his championships also talked about taking on the role of advisor to our next speaker and 2015 Late 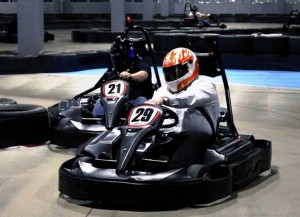 Model Rookie Clarity Newhouse who also spoke of what it takes to be a woman driver with only a short time of racing under her belt and hopes to take it up to a higher level next season. She also talked about her traveling to schools this past fall and informing the kids about the science and technology it takes to go racing. We also had rookie F-8 driver Dennis Whisman Jr. on hand he told us how he was able to start racing in cage karts and then run in the F-8 division at Flat Rock and his Dad Dennis Whisman Sr. is his biggest fan and Dennis Jr. said of how many times he had beaten his Dad this past season and only being 14 years old. Then Laura Tucker was on hand to tell us about their Midwest Indoor Racing Series event in Battle Creek, Michigan during the upcoming Thanksgiving weekend. She talked about the time frame it takes to bring in the track and set it up and then take it down after as well as all the different divisions that they will have running that weekend. Then it came time to ride the karts and those who ran them had a great time and yours truly even put on my helmet and went for run. Slow Run but still a run! Many Thanks to Clarity Newhouse who donated and additional race session for those who wished to race twice that evening! Once again thanks to all of our guest speakers for making our meeting a great one.(Photo Top Left: Steve Cronenwett Jr. Top Center: Clarity Newhouse Top Right: Dennis Whisman Jr.) ( Bottom Left: Laura Tucker, Bottom Right: Race action) ( Photo’s by Rand Thompson) 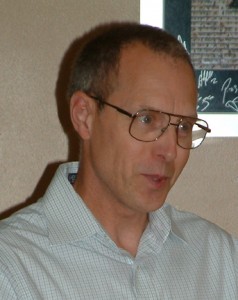 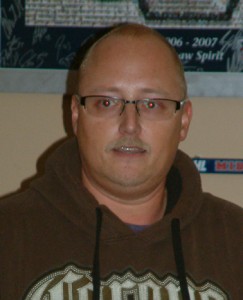 Our first general fall meeting for 2015 at Papio’s Food & Spirits is now it the books as one of the best we have had in a while. Both the Hilliker brothers told us of how they got started in racing and that Steven has amassed 18 championships through the years while David is at 12 total championships. They have the 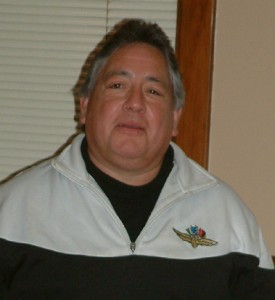 next generation of Hillikers on the way but neither has the thought of retiring anytime soon. Both Leo “The Chef” Pego & “Shut Up” Roger Williams informed us of how they got started in racing. Roger was raised in racing and credited Leo for helping in his start of announcing. Leo stated that he had no plans on becoming a track announcer he started with driving but lettering the race cars was his first passion and announcing was just pushed on him and he has done a great job throughout the years He and Roger are a great tag team. (Top Left: Steven Hilliker Top Center: David Hilliker Top Right: Roger Williams Bottom: Leo Pego)

On October 22, 2015 the Michigan Speedways Promoters Association held its annual fall meeting at the Michigan International Speedways media center. The purpose of these meetings is to discuss various topics like: How to get more fans to attend, to overall costs in running their facilities, what kinds of advertising is the most beneficial to their tracks, how to give the fans the best bang for their buck. They even had a promoter from a national series who was there to say they are trying to form an association like the MSPA down south to help benefit their state also. They talked about the younger kids coming into the sport and the cost of making sure everyone is safe by installing more safety equipment for the racers and the track crews. How to use social media better to get more people involved in our sport! Also the rising costs of insurance for all who race and attend races. Many discussions take place on what venders they have at the different tracks and how to keep prices down and still make it financially. All the associate members each get the opportunity to talk about their organizations. There are many different ones on hand, racing series, tire distributors, insurance companies, safety venders, fan clubs and racing fuel companies. We here talk all the time about how the promoters are making big money off the fans and racers! I personally would say to anyone who would like to try to trade places with a promoter for a week or two to see if they could get the job done I’d say go try it sometime. They battle with Mother Nature, local stick & ball sports, bad economy in some areas, the rising fuel cost for racers, fans & track vehicles, and the cost of running a special show and bringing in a large racing series these are just a few things we as racers and fans don’t realize what the promoters have to go through to put on a weekly show for about 16 to 18 weeks a year and still have taxes, utilities, and maintain their facilities for the rest of the year. So with many race tracks loosing fans and racers because of the economy we are slowly seeing them fold and shut down and never to reopen again. I say take the time to say thank you to the promoters for giving us fans and racers a place for us to come and enjoy the sport we all know and love.