Well, what can I say? One more banquet is in the books and now it is time to get ready for the upcoming racing season. I would be remiss if I didn’t say Thank You to all who helped out by setting up or tearing down at the banquet hall as well as the following for their help in preparing for the Banquet. Larry and Sue Iacoboni as raffle prize chairpersons, Fran Russo as Ticket chairperson, Laura Tucker, Sue Ginter, and Cory Russell for selling raffle tickets. Last but not least, Wild Bill Barnhart for getting the awards ordered and the program put together. Those folks took a ton of work off of my plate and did an excellent job. We are in the process of locking up our Fan Club Days for 2011 and will have a tentative schedule in next month’s newsletter and on this website so you can begin planning your travels for the summer. You will want to renew your membership for 2011 RIGHT NOW so you don’t miss out on the benefits of being a MARFC member as you won’t want to miss any of the great events being planned for the 2011 racing season. As I look forward to the upcoming season I am getting excited to shake off the doldrums of winter and to feel the warmth of the sun and the thunder of racing engines at full tilt.

Thank You goes out to Stan Yee Jr. and Carter Crompton for bringing their “Racing Rides” for display at the banquet. It was great to see the familiar #33 Late Model and a special privilege to have Carter’s 1946 Kurtis Kraft Midget on display, Thank You to both of you for bringing these cars to the banquet for all of us to enjoy.

Photos from the entire evening can be viewed here.

I’d like to thank those who helped with set-up and tear down of this year’s banquet as without their help it would be impossible to get this thing done as efficiently as we do every year: Bob Capps, Dennis Schalm, Chuck Horan, Jeff Horan, Bill Walters, Al Peltier, Jeff Moroni, Laura Tucker, Sue Ginter, Scott Menlen, Steve & Cory Russell, Wild Bill, and Larry Iacoboni. I think set-up was done in record time this year.  Gary “Mr. 300” Lindahl did a great job as our Emcee this year, Thank You Gary for a job well done and congratulations on your perfect game. I’d really like to thank our entire Board of Directors for being there all the time and helping out in any way possible, I appreciate it and I know the members do as well. It was also great to have some of our founders at the banquet as Willis and Marian Flokstra attended along with Vito Lopicollo.

Just before the banquet got started, John Turnbull Sr. and John Turnbull Jr. of the Auto Value/Bumper to Bumper Michigan Legends Series presented an American Flag that had been flown over the United States Capital in recognition and appreciation of the Michigan Automobile racing Fan Club and its continued support of auto racing in the State of Michigan.

I am sorry to say that Mel Kenyon was unable to be with us to accept his Eddie Sachs Jr. Memorial Lifetime Achievement Award but in conversation with Mel He stated that he is thrilled to be chosen for this honor and regrets that he could not be there in person. Eddie Sachs III will be taking the award to Indianapolis this spring and will present it to Mel at the National Fan Club Breakfast.

Jimmy Novack and Kyle Feeney were both surprised to receive a MARFC Special Achievement Award for winning Rookie of the Year titles in their respective divisions at an unprecedented three race tracks each in the same year. Our MARFC promoter of the Year was given to the Michigan International Speedway with Speedway President Roger Curtis on hand as well as Media/Public Relations Director Dennis Worden. Alan Lardie, the voice of the Merritt Speedway helped me surprise Shane Oliver with the MARFC Mechanic of the Year Award, while our Fans of the Year are Tim and Patti Bihn.

MARFC Appreciation Awards were given out to Rob & Lisa Michon as Rob is our webmaster and Lisa secures the facility for our annual Kid’s Christmas Party. Frank & Peggy Loving were recognized for their many years of contributions to our Kid’s Christmas Party and the annual MARFC Family Picnic. Sue Iacoboni was surprised to receive an Appreciation award for the help she gives her husband Larry in helping to send out all of the letters requesting donations for each year’s banquet. Joe Nagraba, who has been our DJ for the last 8 banquets, was speechless when his Appreciation award was given to him. Joe has been much more than a DJ and his help at each banquet has been immeasurable. Pettipren distributors were recognized for their many years of continued sponsorship of the banquet with the many Budweiser items given for the door prize giveaway. We also recognized the great service we have been receiving from Gary DeCarlo, Mary Ellen Sprague, and the rest of the staff at the DeCarlo’s Banquet Center. Congratulations to all of our Appreciation Award winners.

Terry Fitzwater is back in town and was present to give out the newly revived Driver of the Year award to a very surprised Late Model shoe Mike Root. Terry also presented the Tom Carnegie Announcer of the Year award to the voice of the Michigan International Speedway, Larry Henry. Larry shared what it was like at M.I.S. on a typical weekend as well as a few funny stories related to how he performs his craft. 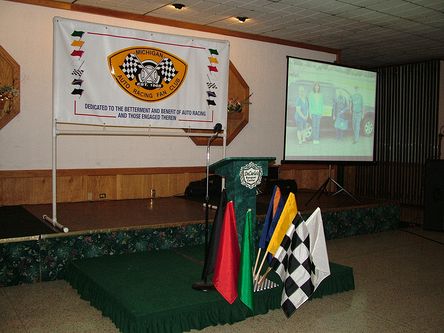 Photos from the 2011 Awards Banquet, celebrating achievements during the 2010 racing season have been posted.

Thank you to Paul Anton for such a fantastic job photographing this event!

Yes folks, we do listen to your feedback!

At the banquet on Saturday, it was brought to my attention that online photo albums of previous awards banquets were not easily found.  While the albums were there, they were difficult to find.  To make them easier, a link to all available online albums have been placed in the “Archives” heading at the left.