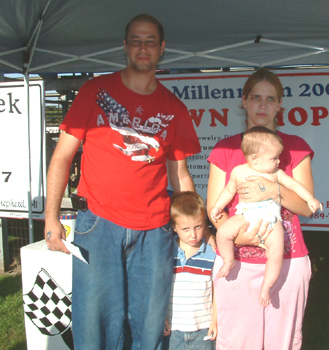 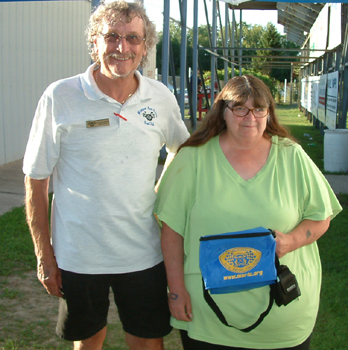 Friday night July 23rd saw the club beat out bad weather predictions around the state for a great night of racing at the Mount Pleasant Speedway. Kenny and Larry Letts along with Board Member Chuck “Choo Choo” Horan and VP “Wild” Bill Barnhart manned the membership table along with yours truly “Da Prez”. What a great night to see so many MARFC Members at this racy dirt track located right in the heart of the state. Randy Kretzinger, driver of the #57 Stock-Mini was selected by the track to receive the MARFC Helmet Bag. Kretzinger, of Holt is in his second year at Mount Pleasant and was involved in a horrific racing accident a few weeks ago resulting in a series of barrel rolls and flips that destroyed his ride and took the jaws of life to extricate him from his car. In true racers spirit though, he has come right back in a borrowed car and carried right on as if nothing had ever happened. Jackie Nelson of Cadillac was the winner of the MARFC member raffle prize. Track announcer Leo “Chief” Pego conducted a moment of silence for Ed VanDuinen who passed away last week and has been instrumental over the years with the MSPA, MMA, and for many years owning the Merritt Speedway with Wife Carmen. Many thanks to Betty and Mario Crook for having the club out and to the “Chief” for the great PR on Friday night, it was great to visit with all of our fiends at Mount Pleasant.

Mother Nature has won again!  Our MARFC Fan Club Day event at the Galesburg Speedway has been cancelled. At this time, we ae not sure if a reschedule date will be possible due to the remaining race season.  Please contact those who do not have interneet access and let them know! 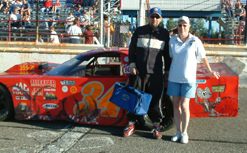 On behalf of all of us here at the Michigan Automobile Racing Fan Club we are very saddened to hear about the passing of one of our longtime members and friend Ed VanDuinen. Ed and his wife Carmen were the longtime owners and promoters of the Merritt Speedway as well as the Michigan Modified Association. He was one of the very first members of the Michigan Speedways Promoters Association and had just taken the time off the last couple of years from promoting to enjoy his retirement.

During my tenure as President of MARFC Ed was one of the first promoters to come up to me and ask if there was anything he could do to help me and the club all I needed to do was ask. That was just the kind of friend Ed was. It was my privilege to award Ed and Carmen the 2000 MARFC Promoters of the year at our Annual Banquet back in January of 2001. He was a strong supporter of his champions always attending our Annual MARFC Banquet and you could most always find him telling stories and laughing with many during the banquets. Most time he was one of the very last to leave.

Ed was a strong and direct speaking man who made friends with fans, drivers, track workers and others who he meet in our great sport of auto racing. He will truly be missed by all who knew and respected him in the racing community. He and Carmen were just voted into the Michigan Motor Sports Hall of Fame for 2010 and I am sure that during the Awards Banquet in November you will feel his presents in the air as both he and Carmen are formally inducted at that time.

Our thoughts and prayers are with Carmen and the entire VanDuinen family at this time. We also are thinking of all the racers and staff ant the Merritt Speedway who were an extended part of his racing family.

We know not way God calls some of our loved ones home so early but, rest assured that they are safe in his care now and forever more. “God’s Speed to you Ed old friend”