Today we are saddened by news of the passing of a long time club member, Bob Free.

Most of us called him Free B.  He was a big supporter of our Children’s Christmas Party for many years, as well as our Annual banquets.  Personally I knew Free B. for nearly 20 years, and as a club member, he just grew on those he meet and talked too.  Racing was the sport that he loved.

The entire Board of Directors and the whole membership send our thoughts and prayers to his friends and family.  God’s Speed My Friend!!

I know that this month will be very busy for all members but we must take a minute to remember what the up coming holidays mean to all of us. Remember to try to help the less fortunate when you can. It makes the season more enjoyable when you do. Remember to keep your thoughts and prayers for the loved ones that we have lost this year and also with our armed forces as they are away and are working hard to keep us and our country safe.

Don’t forget to get your tickets to the 38th Annual MARFC Awards Banquet for January 17, 2004.Tickets are going fast so contact me ASAP for more information or to order your tickets. Remember it’s time to renew your memberships for the 2004 year. You can even give a MARFC membership to a friend or relative for a Christmas gift. Once again May God Bless and Kept you all and have a safe and joyous holiday season and hope to see all of you next season. 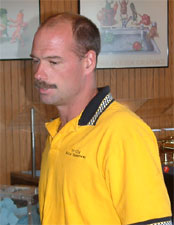 The November meeting was once again a packed house. Our first guest was the Owner & promoter of the Tri-City Speedway Chris Kamlay. Chris told us of how he first got started racing first in drag racing and enduros and up to limited late models. He also informed us of the nearly two-year deal it took to get the Tri-City Speedway. His entire family is part of the ownership deal and they all helped out after the deal was signed and in only about a two-week time they were able to get the track ship shape for the grand re-opening this pasted year. Chris has now added the Tri-City Speedway to our membership and we will be glad to work with him on adding the Speedway to our Fan Club Days event schedule. 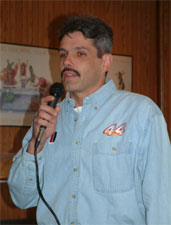 Next up was Flat Rock Street Stock Champion Brian Norton. Brian started his racing career driving enduros and then with help from his Uncle and family they built a street stock and look where his is today. He told us of his driving of a Sprint car one time and the time he drove a figure “8” school bus race. Brian said that a big thrill was driving the legendary Joy Fair’s late model this past season a couple of times and winning a heat race with it was a great deal to not only him but also the Joy. Brian has been a great supporter of our club a we thank him for that. 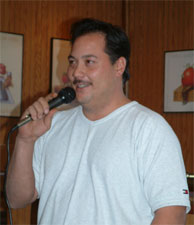 Stan Yee, Jr. the Flat Rock Late Model Champion was on hand and told us of how he never thought that he would end up driving for his father Stan Sr. First he and some of his crew built a Street Stock and ran a season or two with that with some success and the got the chance to drive a Late Model for anther car owner. With all the great drivers who had driven his Dad’s car like Joe Ruttman, John Anderson, Steve Lee and Chuck Roumell Stan had a lot to prove. Stan said that his Dad continues to build and engineer the chassis today with great success. Now with this Championship Stan says he feels like he is part of the history of the familiar yellow # 33.

Our Children’s Christmas Party Fund Raiser Raffle was also held at our October meeting. Five-year-old Austin Michon reached deep into our ticket barrel and pulled the two winning tickets and would you believe that the winner for both the Racing Patch Quilt and the Eddie Sachs Die cast were the same person. Carl Bumgarder of Saline, MI was the winner. 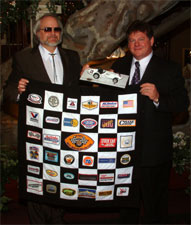 Carl Donated the Racing Patch Quilt to the Focus Motor Sports Ministries group who will have it on display in the traveling trailer at many racing events. 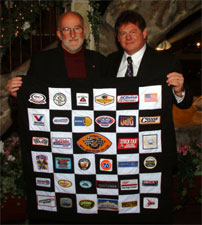 Congratulations Carl, and a special thanks to all who donated their time. 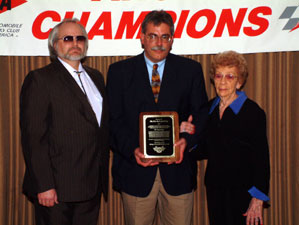 Last month at the Flat Rock Speedway Awards Banquet, we were on hand to present the Speedway with a special award for celebrating 50 years of racing. Receiving the award was promoter/ owner Ron Drager and Co-founder of ARCA Mildred Marcum. Fifty years is a great milestone and we hope to honor all of our membership tracks in the future as they hit this mark or even longer in our sport of auto racing here in Michigan.  Pictured above from left to right are MARFC President, Bill Barnhart, ARCA President of ARCA, Ron Drager, and The ARCA Matriarch, Mildred Marcum.

RENEWAL TIME is here don’t forget to get your 2004 membership renewals in by December 31, 2003. You will not want to miss any of the newsletters or miss out on the 2004 Fan Club days events. If you are not a member and would like to join please go to the membership link and follow the information there and welcome.

Our 38th Annual Awards and Dinner Dance will be held on January 17, 2004. Some of our very special award winners on hand will be: Bob Keselowski and he will be receiving the MARFC/ Eddie Sachs Memorial Lifetime Achievement Award for his over 30 plus years of racing from right here in Michigan to the now current NASCAR Craftsman Truck Series. Also, Dave Despain from the SPEED channel show “Wind Tunnel” will be presented the MARFC Electronic Motorsports Media Award for 2003. Dave is excited about the award.

Dr. Dick Berrgren and Speedway Illustrated will receive our Michigan Motorsports Publication Award for 2003. Dick is happy to get this award for all of us here in Michigan. Our top award is the MARFC Presidents Award and this year it will be given the Automobile Race Club of America (ARCA) and its founders John & Mildred Marcum. For 50 years of outstanding racing not only here in Michigan but across the country. ARCA is based right here in Michigan and it is good to see that it will continue to grow and remain with us here.

For ticket information contact me at presidnet@marfc.org. We had limited seating this year so get your ticket early.

Our October meeting was a great one if you missed it. Tom Kestenholtz of the MCR DWARF cars and the Michigan Motor Sports Hall of Fame was on hand and told us all about the DWARF car series and how the cost of running one is relatively low. Tom also informed us about some of the inductees into the Hall of Fame for 2003. They are Jay Woolworth, Steve Sauve, Tommy Bowles and Danny Byrd plus others. Publisher Terry Fitzwater of the Michigan Racing Scene also was on hand and told us how he got started and that he started this paper because of his love or auto racing here in Michigan. Terry also said that any fan club member who subscribes to the paper would receive ten percent off the subscription. Thanks Terry! 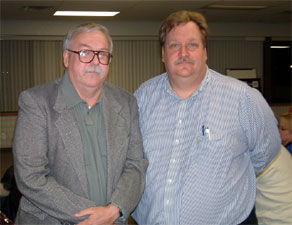 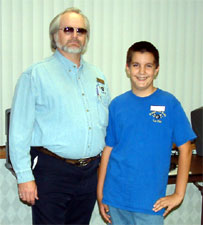 Club member Jimmy Tucker was appointed by the board as our new JR. PR Director. Jimmy has worked hard at signing up new members at fan club days and helps out at our general meetings selling our 50/50 tickets and is always around to lend a helping hand. All of this and Jimmy just turned 13 years old a couple of months ago. Great job Jimmy!

Tickets are now on sale for the Eddie Sachs 1/18-scale die cast 1961 Indy 500 Pole winning racecar and our Racing Patch Quilt.  Two winners will be drawn with the first winner to choose either item.  The second winner to receive remaining item.  Please help support our Children’s Christmas Party with the purchase of tickets for this great event.  Tickets are only a $ 1.00 donation. If you would like to purchase tickets to help support our Children ‘s Christmas Party please contact me and I will get them to you.  Remember the children are our future members and racing champions.  I thank you in advance for your support and so do the children. 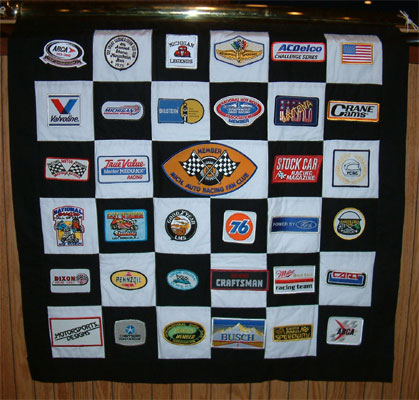 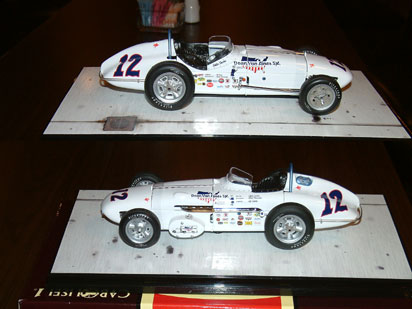 First thing I’d like to pass on a Very Special Get Well to Barbara LoPiccolo wife of our very on Vito LoPiccolo. Barbara has been in the hospital for the last few weeks and we wish her a speedy recovery. Well the season is over and all the Champions have been crowned and everyone can take a few days to rest up from a busy year. ( YEH RIGHT!) I know that most everybody is already working on their cars for next season and are busy getting ready for all the banquets coming up.

I’d like to thank all of our MARFC membership tracks for once again allowing our members to come into their facilities to see the best racing around the country. Michigan has the most outstanding race tracks around. Once again on behalf of our members Thank You to all !!!

Remember the MARFC Annual Dinner Dance & Awards Banquet will be held on January 17, 2004. For ticket information please contact me at president@marfc.org. Get your tickets early for seating will be limited this year. 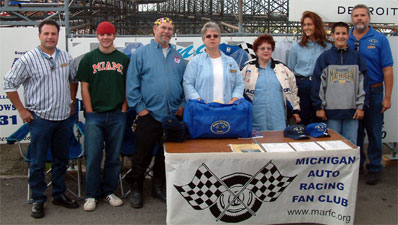 Cool and rainy weather but all went fine for our members who attended. Great show with all the cars on hand for the Glass City 200. Howard Kelly, Jr. was awarded our MARFC/Uniform Helmet Bag for his Championship in the Sportsman division using a barrowed car for the last few weeks. Very special thanks to Ron Drager, Roy Mott, Scott Schultz and Greg Riddle for rescheduling our fan club day on a big weekend show. Many thanks to all who lent a helping hand they were: Steve & Cory Russell, Laura & Jimmy Tucker, Larry & Sue Iacoboni, Fran Russo, Bob Free, Bill Palmer, Jeff Moroni & son. 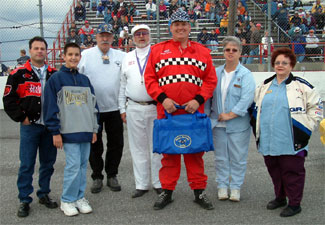 Tickets are now on sale for the Eddie Sachs 1/18-scale die cast 1961 Indy 500 Pole winning racecar and our Racing Patch Quilt.  Two winners will be drawn with the first winner to choose either item.  The second winner to receive remaining item.  Please help support our Children’s Christmas Party with the purchase of tickets for this great event.  Tickets are only a $ 1.00 donation. If you would like to purchase tickets to help support our Children ‘s Christmas Party please contact me and I will get them to you.  Remember the children are our future members and racing champions.  I thank you in advance for your support and so do the children.