We here at the Michigan Automobile Racing Fan Club would like to take this opportunity to send out a VERY SPECIAL THANK YOU to our membership tracks for making it another great racing season for our members. Without their continuing support of our club we would not be here. For nearly 37 years our club has had many race tracks that have supported our club through out the State of Michigan. We once again thank the following tracks for their
support:

As members, remember to thanks these tracks for being apart of our club.

This month is going to be a very busy one for us here at MARFC. I would like to take this opportunity to send a very special thanks to Roger Blackstock for once again giving MARFC national exposure by running our logo on his Hooters Cup Series Dodge this year. Currently Roger is running 11th in points. Even his souvenir T-shirts have our logo on it.

Thanks Roger for your continued support.

Remember to check out our remaining fan club days. We still have some great race tracks to visit yet this season. It’s still not too late to join our club just go to the membership link and print out the form and sent it in ASAP so you too can become apart of the best auto racing fan club across the state.

Mother Nature has won most of the races run so far this season. Many race venues have been cut short or cancelled do to her wrath. I am sure that she will soon be defeated. With the shows being cancelled many of you the fans are just itching to see some great short track racing very soon myself included.

I hope that everyone had a great Memorial Day Weekend. It is at this time of year where we needed to take a few minutes and remember all those who are not with us today. With all that has happened in the past few months it is important to remember those who have lost their lives defending our country, our beliefs and freedom. May we continue to compete in the sport that we all love so much because of those who fought for us to have the right to do so. We can take pride that as race fans we have shown our support with the flying of our flag and special paint schemes on many racecars across the nation. Our thoughts and prayers are with all those who are still fighting for that right and all their families here at home. May they all come home safe and soon.

First off this month I would like to send our Get Well wishes out to a few special people.  Donna is the wife of Paul Zimmerman promoter of the Spartan Speedway. Donna had a stroke awhile back and Paul is very busy taking care of her at home as well as getting the Speedway ready for the 2002 season.  To long time member Bill Palmer AKA” Willie the Clown” who had a little heart trouble last month hope to see Bill back at the races again soon.  Also, to Jack Roush and Junie Donlavey speedy recoveries to them both.  We know that the Good Lord has been watching over all these fine folks and we send our best wishes to them all.

I’d also like to welcome three new Speedway’s to our membership for a total of thirteen now.  We Welcome the Auto City Speedway located in the Flint area, the Cherry Speedway up near Traverse City and the Mid-Michigan Raceway Park in Palo, MI.  Thank you all for becoming a part of our ever-growing club.  I encourage all of our members to stop in at these tracks as well as our other membership tracks and let them know that we as members are thankful for all their support.

The last meeting before the racing season began was awesome. all the speakers, whether able to be there in person, or via video tape, entertained the masses very well. 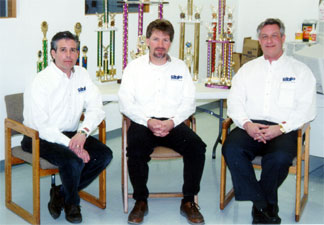 John Nece was unable to attend however our president was able to visit his owner’s race shop and video tape a tour and a sit down chat session with John, his car owner, Joe Tranchida, and Crew Chief, Chip Minich.

Above- from l to r- Joe Tranchida, John Nece, and Chip Minich of Cinjo Racing in Mt. Clemens, MI.

Below- One of the trucks John drives on the American Race Truck Series.  Cinjo Racing is also the stable for Trans Am driver Tommy Archer. 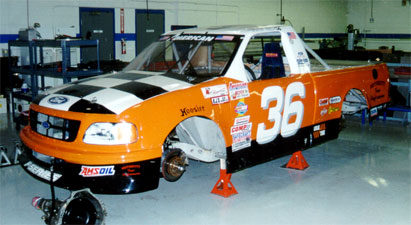 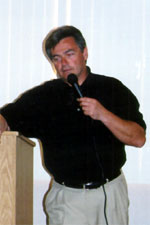 Dr. Bob DuCharme from Auto City Speedway updated happenings at Auto City along with some detailed history of his racing career, beginning with motorcycles all the way to being co-owner of Auto City.  One of the most interesting facts revealed was his close friendship with Bob, Kay, and Ron Keselowski. 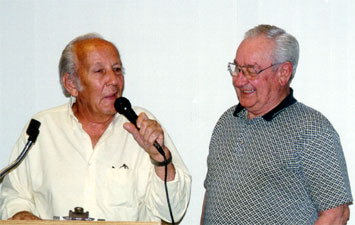 The highlight of the evening had to be Jack Goodwin, by the time he was finished, I wondered if he wasn’t part clown.  He and his brother David, and former crew chief/car owner, Danny Mancini recapped some of their racing moments in a most entertaining fashion.