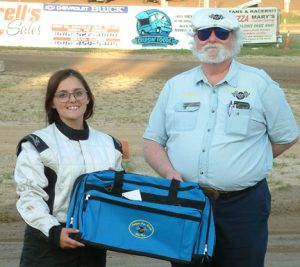 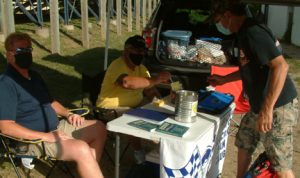 Fabulous night for some great racing on the dirt at the Crystal Motor Speedway. Our members and the rest of the fans enjoyed tons of racing with 111 cars in the pit area put on quite the show. Our MARFC Uniform/Helmet Bag was given to Pro Truck # 14P driver Elizabeth Polley. This young lady has had a bit of bad luck this season with hopes that our MARFC bag with change that. New club member John Hatfield won our MARFC members raffle that night. Many thanks to Ron Flinn and his crew for rescheduling this event this season. MARFC table helpers for the evening were Rob Michon and John Jackson. (Photo Top: Elizabeth Polley and MARFC President Bill Barnhart) (Photo Bottom: (MARFC Board members working our table welcoming MARFC members)