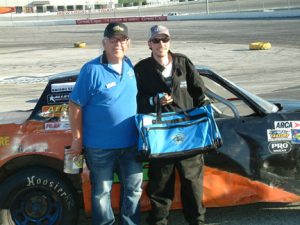 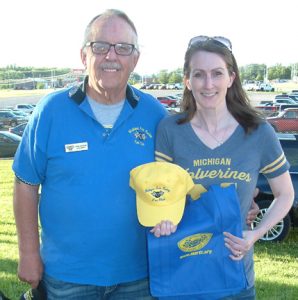 Clear skies on hand for our voyage to the Toledo Speedway for 2019. MARFC members were able to see some great racing on the high banked half mile track. Factory Stock # 28 driver Mike Miller was presented out MARFC Uniform/Helmet Bag for supporting his division for years he also videotaping races when he’s not driving and putting them on the net. Mike won his first heat race that evening just after the bag presentation. Gene Hurd won our MARFC members raffle. Thanks to John Jackson & Paul Anton for working our table. Many Thanks to Scott Schultz & the Speedway for the invite. (Photo Top: John Jackson & Mike Miller) (Photo Bottom: John Jackson & Misty Bolt standing in for her father Gene Hurd)