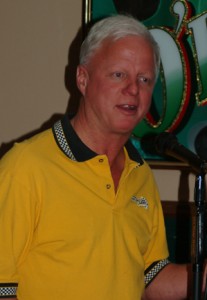 We had another great meeting at Papio’s Food & Sprits in Reese Michigan this past November 10th. Greg and the staff at Papio’s gave us one side of the restaurant and with two servers the food was coming quick, hot, and good. Our first speaker of the day was Dave Hausebeck, the owner/promoter of the Arthur Raceway in Reese. For those of you that are maybe not familiar with the Arthur Raceway, it is located in Reese on M-15 ½ mile south of M-81 behind DHT Trucking and is a 1/8 mile clay oval that is set-up for Go Karts and features 10 different classes of karts with drivers ranging from the 5 years old to the, well, let’s just say capable of getting discounts. Racing action starts at 4 PM on Saturdays from early April to late September with practice starting at 2:30 PM. Dave shared with us how the race track got started by a group that wanted a place to race so they built the track behind the trucking shop and it just evolved into a leader in providing an outlet for those wanting to get a start in racing, move up the ladder, or just plain have fun without spending a lot of money to go racing. The main emphasis at Arthur is clean racing and sportsmanship. Our second speaker was Jim Lamb, Competition Director at Waterford Hills Road Racing in Clarkston and the driver of the bright orange #17 D Sports Racer at the track located at the Oakland County Sportsmen’s Club. Jim shared with us how his roots in racing are actually with the NHRA and Drag Racing. For those of us familiar with Drag racing Jim shared that He has a couple of those nifty statues of a guy and a tire that are known as “Wally’s” which are won at a National Event for garnering a class win. After a number of years driving very fast cars in a straight line, Jim was approached by a friend about driving a car that was meant to turn not just left but right as well. He liked the idea and off He went to Waterford Hills and started Road racing. While not real fast at first, Jim quickly learned the skills needed to be smooth and fast through the turns of a road course and eventually won his class championship. (Top Left: Dave Hausebeck, Top Right: Jim Lamb) (Bottom Left: Chuck Darling, Bottom Right: Steve Puvalowski) 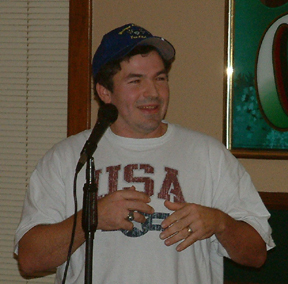 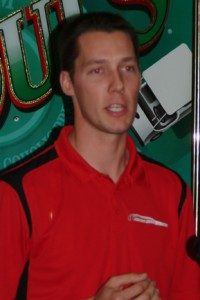 Jim spoke about the track out at Waterford Hills which is a 1.5 mile, 12 turn road course with elevation changes nestled in the heart of the Oakland County Sportsmen’s Club. There are 6 racing weekends a year which consist of Saturday qualifying, a class race on Saturday and then both a class race and finale on Sunday. The races get going around 10 am and are done before 6 pm. The different classes are put out on to the track in “Run Groups” of about 20-30 cars at a time and the 2012 car count was  approx. 90 cars a weekend. All racing is run under the rules of the SCCA and can include anything from a formula-V (Volkswagen powered with skinny wheels) on up to full blown Corvettes, Camaro’s and Mustangs, with many other types of cars in between. Their biggest event is Vintage Weekend in July which was our MARFC Day this past summer. Jim will be bringing his potent machine to be on display at our banquet in January. Next up was Chuck “The Flounder” Darling the “East Side” voice of the MCR Dwarf Series and the Founder of the Michigan Short Track Racing Club (MSTRC). Chuck spoke about the MCR Dwarf series and what his duties are and how much He is enjoying being one of “The Voices of Summer” along with his partner Kyle “Flipper” Trinklien who is  the “West Side” voice of the MCR Dwarfs Series. Chuck spoke about the upcoming 10th annual MSTRC Bowling Tournament to be held in Owosso at the Capital Bowl on February 9, 2013. This is one of the major events held in the winter off season that brings the racing community together to raise funds for those in our midst to help them through a tough spot in life. Over the years the MSTRC and its members have helped out many in racing including a track clean-up/ fix-up back in the early days as well as having a ton of input into the early phases of the Template Bodied/Crate Motored Late Models evolution we see in today’s racing. We’ll have more on the Bowling Tournament in the January 2013 MARFC Messenger. Steve Puvalowski  of the Tri-City Motor Speedway was also on hand and He shared with us how the closing of the mine shaft on the speedway property was coming along. Steve shared with us the process that is used to do that type of thing and that when it is done the shaft will be forever closed off. Plans at Tri-City for 2013 include double file restarts, more grandstands and the bathrooms should be done along with better plans to handle the larger crowds they experienced this past season. All the plans are just another way of providing the fans a pleasurable experience at the Tri-City Motor Speedway in 2013 and beyond. Yours truly won the 50/50 drawing and donated it back to the Children’s Christmas party. A big Thank You to Denny Trinklien for getting this meeting set up and to all those for attending.