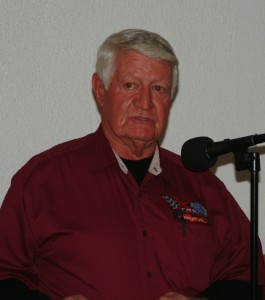 The first meeting of our off season was held on October 20, 2012 at DeCarlo’s Banquet Center in Warren. We had three guest speakers and also drew the winners in our annual Cheer Raffle. First prize of $300 went to Richard Stevens of Albion, Second prize of $150 went to Rudy Walkley of Ludington, and Third prize of $100 went to Thomas Hunt of Jackson, congratulations to all of our winners and thank you to all who bought or sold tickets and thank you to all three winners who made donations back to our Childrens Christmas Party. Our first speaker was Jim Hanks of Must See Racing and the Extreme Motor Sports Sprint Car and Super Modified Series. Jim shared a bit about his history in racing and then really shared his passion for open wheel racing, especially the fire breathing Winged Sprint Cars and the wild and wooly Super Modifieds. Must See Racing has been around a few years and has been putting on Sprint Car races all over the Mid-West and as far south as Pensacola Florida and Mobile, Alabama. Must See Racing has some big things on tap for 2013 that include televised coverage of ten Sprint Car shows on Fox Sports Net with more coming in the Super Modified portion  once all the final preparations and scheduling are completed.  Jim’s passion for Auto Racing, the fans, and the drivers was very evident in his speaking especially as He spoke about the big three day event they have partnered up with the city of Winchester Indiana next spring that will include Winged Sprints one night, Super Modifieds the next night, and a speed trial on another night at Winchester Speedway that they are inviting the fastest of the fast to see just who really is the fastest. All that culminates later on with the running of the “Little 500” at Anderson Speedway, just up the road from Winchester. The Must See Racing group has put on races at eleven different tracks in five states with over sixty race teams and looks to do even more in 2013. Truthfully, Jim shared so much that it I could write an entire newsletter on what this Michigan based organization has on tap for 2013 and beyond with not only 15 Sprint Car races, 10 Super Modified Races, and their 48 ft. Fan Zone trailer that includes an actual alcohol breathing Super Modified with a starter that fans can get their picture taken in as well as hit the starter button, crank it up and actually feel the rumble and smell the fumes from the 800 horsepower alcohol breathing monster under the hood. This group put on races at Kalamazoo, Berlin, and the Auto City Speedways in 2012 and is looking to do the same if not more in 2013. Their website is www.mustseeracing.com if you want take a look.

As Jim wound down, He brought up his friend and our 2012 MARFC/Eddie Sachs Jr. Lifetime Achievement Award recipient, Tom Bigelow who traveled from Indiana to be a part of our meeting. Tom started off by sharing about being raised on a farm in Wisconsin and as a kid, heard the radio broadcast of the Indianapolis 500. Upon hearing that broadcast Tom was bitten by the racing bug and let it be known that He was going to race in that race someday. He made good on his promise and raced in that race 9 times with a best finish of sixth in 1977. Tom shared a few stories with the group and also spoke about the budding careers of his grand kids and you could just sense the pride that He has in what they are doing. Tom spoke about getting his start in racing by driving Stock Cars back at Sun Prairie Wisconsin and how he learned early on how to get one of those cars to act like turtle with its wheels stuck up in the air. When asked what his favorite track was he said that really he liked them all but mostly liked Winchester and Eldora as Tom’s career never pigeon-holed him into being either a pavement or a dirt driver. 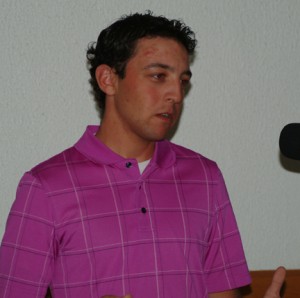 Scott Menlen was also on hand and shared with us about the new Promotional group that He is a part of called the “Midwest Indoor Racing Series”. They will have their first indoor race on November 3rd in Flint and will then have another race on December 22nd in Birch Run. The group is planning on hosting Winged and Non Winged Mini Sprints as well as go-karts, Legends cars, Quarter Midgets, Lawn mowers , and Mini Cups.  Thier website is www.MidwestIndoorRacingSeries.com and they will have races in the Perani Arena in Flint and in the Birch Run Expo Center in Birch Run.