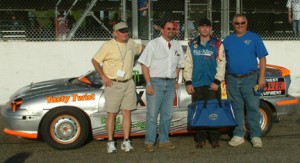 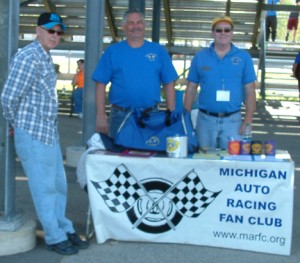 Friday May 18, 2012 took us to the “Track the Stars Call Home” Spartan Speedway for a great night of racing at the historic Mason oval. A good crowd was on hand with the MARFC Helmet Bag going to the driver of the #47 Pony Stock Wayne Beckner Jr. Wayne and his family have been supporters of the Spartan Speedway for years and was the 2009 Pony Stock Champion. Wayne went out and won the four car dash and his feature as well. Our MARFC member winner was Doug Jakeway and our table helpers were Dennis Trinklien, Rand Thompson, and Bob Wilkinson. Many thanks to our table helpers and to Jim Leasure and the staff at the Spartan Speedway for having the club out and to track P.A. Announcer “Big Ed” Inloes for his mentions of the club. We had many members in attendance and even some from Ohio that made the trek up to the Lansing area.