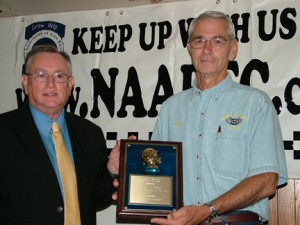 The 2012 National Association of Auto Racing Fan Club’s 60TH Annual Convention was held on Saturday May 26, 2012 at the Clarion Waterfront Plaza Hotel located at 2930 Waterfront Parkway, Indianapolis, Indiana. We had a large presence at this event and our own Bill Walters was honored with the Lee Holst “Presidents Award”. Congratulations Bill, you have worked hard on this convention and attended for many years so this is an honor very well deserved. Guest speakers at this year’s convention were Former driver Tom Bigelow, USAC Drivers Darren Hagan and Kody Swanson, and Indy Car Official Tony Cotman. Charlie Patterson and Richard Hoffman were inducted into the Hall of Fame while Steve Sapp won the Tony Hulman award and the Late Dan Weldon was honored with the Arthur McHugh Memorial Award. Tony Cotman accepted on Susie Weldon’s behalf.Our own Eddie Sachs III was on hand to accept his Art McHugh Award from 2011. Eddie was not able to attend the breakfast in 2011 due to his responsibilities at the 100 year celebration over at the Indianapolis Motor Speedway.