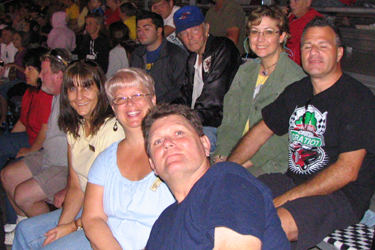 What a great night of racing at the Flat Rock Speedway on August 28th. Our friends at “The Rock” gave us another night after losing out to Mother Nature on June 5th. Longtime Club member Mt. Clemens “Old Timer” Doug Parsells was our MARFC Member Drawing winner. Doug has been a Flat Rock and MARFC supporter for many many years. It was great to see lifelong race fan and former MARFC Board Member Bill Palmer out at the races this night as Bill has been under the weather for a quite while but was able to get out and enjoy a night at the races with his son and Board Member Jeff Moroni. Back in June we had been able to present the MARFC Helmet Bag to Harold Davis Jr. So we were able to just plain have a night to enjoy the races. Many thanks to Scott Schultz, Ron Drager, and the staff at Flat Rock for having the club out again for a full night of racing. Also a big Thank You Flat Rock/Toledo Announcer Gary Lindahl for all the great PR. Gary’s style of announcing and knowledge of the sport shows why he is a member of the Michigan Motor Sports Hall of Fame. Table helpers for the night were Jeff Moroni, Laura Tucker, Sue Ginter, Larry Iacoboni, Paul Anton, and Cory and Steve Russell as well as yours truly. Thanks gang we really appreciate your help. I also want to Thank “Wild Bill” Barnhart for having the MARFC signs on his truck as he used it as the pace car this past summer at Flat Rock, it is always great to have that much exposure for the club. 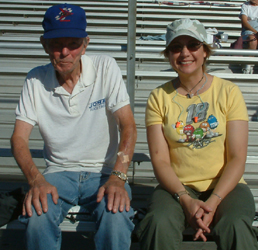 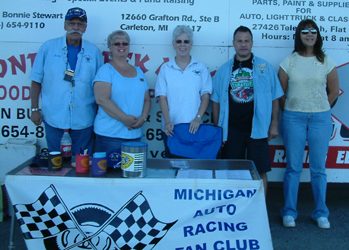