Here we are the season in now underway and tracks and open for business and race fans are ready for some outstanding racing across the state on the asphalt. Teams are ready to compete for championship in all divisions and drivers are set to race hard to see that championship dream come true.

This offer just in from the Houghton Lake Kart Speedway racing starts at 7:30 pm on Friday’s located at 3446 WEST EMERY RD HOUGHTON LAKE, MI 48629. Thanks to Jim Pape and Bruce & Cheryle Sandera for the invite. Any Friday night during the 2009 season.

I am also pleased to announce the addition of the Winston Speedway to our membership tracks list for 2009. Tom Sprague has graciously decided to join our club and has booked a fan club day event for this season. Please join me and thanking Tom and Winston for being part of our great club. Friday July 31, 2009 Winston Speedway.

On Saturday October 3, 2009 the Toledo Speedway will once again give MARFC members $ 5.00 off general admission for the Glass City event. Many Thanks to Ron, Roy, & Scott for the invite!

We are still in need of volunteers to assist in helping with fan club day events. If you can help with the fan club table at any of the scheduled dates please contact me with the one or ones you can help out at and we will greatly appreciate it tremendously. Thank you for your continued support of our great club.

Our April meeting at Nicky’s Tavern was quite a fun event for those who attended. Our annual elections where held and here are the results of that election. The Executive Board is now as follows: Dave DeHem was voted the new President of MARFC. Bill Barnhart is now Vice-President and Susan Ginter is still Secretary/Treasurer. All the Executive seats were run unopposed so no ballot vote was needed. The entire Board of Directors were re-elected unopposed also. So you’re board members are: Larry Iacoboni, Jeff Moroni, Al Peltier, Cathie Rohloff, Cory Russell, Fran Russo, Laura Tucker, and Bill Walters. We continue to work together to see that our club moves forward in direction to ensure that we grow with the times. Congratulation’s to the new MARFC Board. The new board will take their elective seats on June 1, 2009.

One of our longtime members Bill Palmer a.k.a “Willie the Clown” for our children’s Christmas parties has been in and out of the hospital for the past month and we would like to send him a very speedy recovery. Bill has served on the board of directors in the past and has not missed a banquet sense becoming a member back in the early 70’s.

Also get well soon to Frances Duff another longtime member who took a bad fall back in late March and has been in serious condition for quite awhile now. Our thoughts and prayers are with both these great members.

DID YOU KNOW TRIVIA QUESTION? 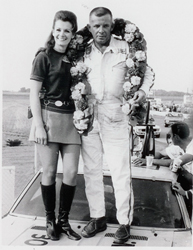 Back around 1969 when the Michigan International Speedway was still young and just getting started. There was a race called the Michigan Automobile Racing Fan Club 100. They even had a trophy girl who presented the winner of the race with a MARFC Trophy. Her name was Karen Hall. Our old friend Vito informed me of this event and we decided to see if anyone could give us the name of the winner of that race. If you know the answer please send it in to me with your name, phone number and address.

All correct answers will be put into a barrel and one person will win their 2010 MARFC membership and a new MARFC hat.

Answer deadline is May 20th.

Send answer to: MARFC TRIVIA QUESTION, E-mail at president@marfc.org. Good Luck to you all!