Renewal time is here and you need to renew your membership ASAP so you don’t miss out on any of the events scheduled for the 2008 season. Also, we are always in need of volunteers to assist at any of the Fan Club Day events so if you think you could man our table at one of our tracks please contact me and I will put you on the list of helpers for that event. Thank you in advance for your support.

Once again our web master and I are asking that all MARFC members who are active racers please contact us with your photos and track information to add you to our racing members page on our web site. Contact him at webmaster@marfc.org with all your information. Remember this is for racers not matter which division or track you race at. We want to see this page grow more this season.

As we are renewing memberships we are also updating our e-mail list so please contact me with your current address or new one so we can update this ASAP. We find it very important to have this list to send our fast date changes and announcements as they come up and if you would like to have your monthly newsletter e-mailed only please advise me of this also. Thanks for your time & support! 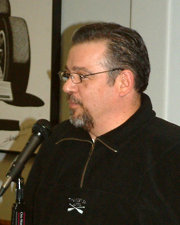 Our meeting at KART 2 KART was on outstanding one to say the least. This was our last meeting at the old facility and hope to get one scheduled soon at the new location in Madison Heights, now called the APEX Conference & Karting Center. Just a couple of days before our meeting I was informed that guest speaker’s Chuck Silva’s wife Gail was badly injured in a car accident and thought he was going to be unable to attend our meeting so we contacted Randy Gallagher and Robbie Loving to fill in and then Chuck was able to make the meeting and spend some time telling everyone about his racing career that started over 32 years ago. Chuck and his brother Chris have raced under the Gori11a Racing banner for all those years and he has gone on to win back to back modified championships at Auto City and was the 2007 Dixie Modified Champion. And we send a Get Well Soon to Gail Silva! 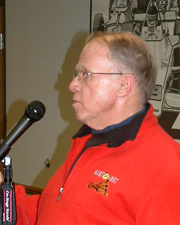 Bob Capps was on hand to give us a little bit more information on when the new APEX location will be opening. He says they are looking at early April sometime if all goes well. 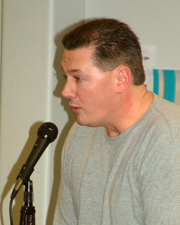 Todd Hutson gave us some updates on his company The Stadium Events that plans motor coach transportation to some racing events like the Indy 500 he has some great one day and two day deals for more information you can go to his web site at www.thestadiumevents.com and check out his complete list and information to all his events planed for 2008. 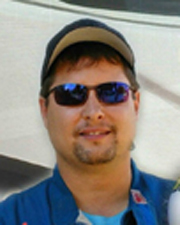 Randy Gallagher 2007 Michigan Legends Masters Champion who at the last minute was able to fill in gave a very interesting account of how he started racing and what he had done up to now. Randy started is Hobby Stocks at Mt. Clemens Race Track and then on to Go Kart racing across the state and then to the Legend cars he has two cars that he & his son Randy Jr. race as team cars and have done well in the short time in this series. 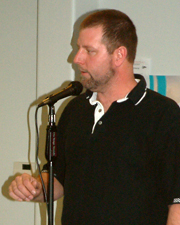 Robbie Loving was also on hand to fill in and told everyone about what being a second generation driver like his father is Frank Loving. Robbie talked about how he got started in the figure 8 division and moved to Late Model & Sportsman division but ultimately returned to great success in the figure 8 division capturing 2006 & 2007 Championships and Flat Rock & the 2007 Championship at the Toledo Speedway. He credits his car owner Robby Martel for the success he has had in the last few years. He also mentioned about running the 3 hour endurance race and the Indianapolis Speed Dome for many years with a best of 6th just a few years back. Originally Scott Menlen was to be with us also but do to a rescheduling of a Late Model Testing school in Florida he was unable to make it and we hope to have him at our April meeting to tell us of his career and where he is headed to this up coming season.