Banquets are over and it’s time to get ready for another great racing season. Cars are being built, engines are getting freshet up, and fans are in need of the smell of racing fuel and fresh burning rubber. Oh how I can’t wait for it all to begin. Best of luck to all you racers and you race fans keep supporting the tracks as we need to keep them in business so we have someplace to enjoy our sport. And there is NO BETTER place to see great short track racing than right here in this great state of Michigan.

I’d like to take the time send out a very speedy recovery to our Vice President & PR Director Dave DeHem. Dave went into the hospital the Monday after the banquet to have his left knee replaced and is home now and doing fine. Linda Walters wife of Board member Bill Walters had the same surgery on the same day but at a different hospital. “Get Well Soon” to both of you is our wish. 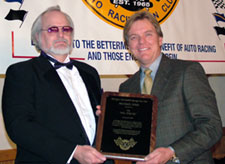 The 42nd MARFC Annual Awards banquet is now part of history. With a record crowd on hand a fantastic time was had by all who attended. “Shut Up” Roger Williams did an outstanding job as master of ceremonies for the evening keeping everyone entertained through out the entire award ceremony. Phil Parsons was on hand to accept the MARFC Presidents Award and was truly humbled by the honor. Phil talked about his racing roots here in Michigan and talked a little about his family who were in attendance.

Artie Sommers was on top of his game when Eddie Sachs and I presented him with the MARFC/Eddie Sachs Memorial Lifetime Achievement Award. Artie said that it was made possible for him to do so well in his racing career because of great car owners and all the crew who worked so hard on the cars through out the years. 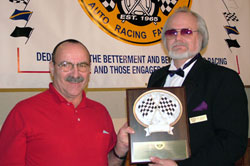 Verwayne Greenhoe received the MARFC Electronic Media Award for his dedication to bringing local short track racing to many folks through the use of the internet and stream netting local radio shows so that our troops across the world can keep up with racing here at home. The MARFC Motorsports Publication of the Year went to the MARC Times Racing News. Unfortunately Dick Beebe was unable to attend after having car troubles in root to the banquet but, Darcie Fuzi was able to accept on his behalf and said that Dick was grateful to all who read and subscribe to the paper and he credited to the staff that does most of the work to get it out to the public.

Our special surprise awards were up next and surprise they were. The 2007 MARFC Promoter of the Year Award went to the SAULT AREA RACING ASSOCIATION who runs the Kinross Speedpark. Bill Cryderman was on hand and was totally in shock and accepted the award for the entire staff of volunteers who work at the track. Rich Robinson Jr. modified driver and mechanic who won three championships was presented the 2007 MARFC Mechanic of the year for his efforts. MARFC Fan of the Year went to a club member who attended many races this past season and always was willing to help out at the events Dan Darrow Sr. The award was sponsored by Jim’s Industrial Catering in memory of Big Jim Gullett founder. Terry Fitzwater publisher of the Michigan Racing Scene was on hand to present two of his special awards. The first was the Tom Carnegie Announcer of the Year to a very surprised Larry Loynes who announces at the Auto City Speedway and Dixie Motor Speedway. Then Frank Seder was presented the Driver of the Year Award from Terry. Frank was the late model champion from the Merritt Speedway. Ron Drager President of the MSPA awarded the MSPA Promoter of the year award to the Flat Rock Speedway & Scott Schultz accepted it on behalf of the speedway.

Terry Bogusz Jr. & Pat Moran were given appreciation awards for their support of our club. Two very special appreciation awards were presented that evening the first going to Bill Stone who after 40 plus years as a member of the board of directors stepped down and is now looking forward to retirement. The second special award was given to Stella & Eugene Lindahl for all of their continuous support of the club with their past 50 plus years in racing across Michigan. I’d also like to thank Scott Melen Motorsports, Mike Mouch & I-96 Speedway and RM Motorsports for having their cars on display at our banquet.