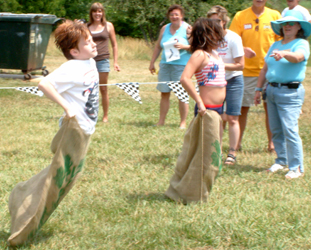 If you didn’t attend the 4th Annual MARFC Family Picnic you missed the best one yet. Even with the hot temperatures everyone on hand had a fantastic time. Lots of food and the high-light of the day were the games that had young and old entertained most of the day. Many thanks to Chef Larry Iacoboni for his great barbeque skills and to all the others who helped set up and clean up after I say a big Thank You to you all. Many thanks to those who lent a helping hand during the games as judges and game coordinators. Special thanks to all who donated extra game prizes and funds to ensure a great time for all. For all of you who brought a dish to pass thanks again for your support. 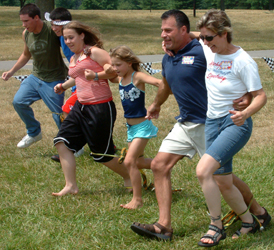 I know that the entire board and all the kids had a great time and we look forward to our 5th Annual Picnic in 2008. Remember that our MIS Fan Club Day event is on August 17th and you will need to go to the main ticket office near GATE #24 and show your current membership card at that time to receive a hard event ticket to use at the entrance gates. Remember GATE # 24 ticket office only! Hope to see many of you there and have a great time.

Good Ole Dave Marcis # 71 NASCAR Driver was driving the Life Boy Dodge at that time sent the club a case of soap with each bar autographed by Dave and he cleaned out his garage fan blades and spare parts along with a stand up full size poster of himself autographed. We also auctioned off the fan clubs old Underwood typewriter with one bad key. Fran Russo just happened to be there selling ½ & ½ tickets which was a big help in adding to the clubs amount. MARFC was back in business with enough money to send out the newsletters again. Jack Calabrase was a USAC midget driver and was also on the MARFC board, gave the fan club the hood from his midget race car to be auctioned off. The bidding wasn’t getting as high as I thought it should be so I, started bidding to get the price up and as luck would have it. I now own an autographed midget race car hood. 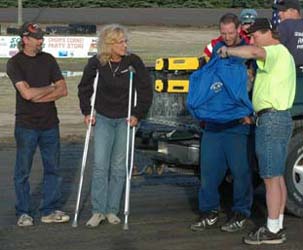 Cool but dry night for some outstanding dirt racing on the
west side of the state. It is great to have Cherry Speedway back on our
schedule again after a few seasons away. Our MARFC Uniform/Helmet bag was
given to a young driver Chad Wright for the hard luck he has had this
season. A couple of weeks before we were there he and his family were
heading home after the races and was in a bad accident and his truck and
race car were damaged. Thank the Lord for no major injuries to his family.
With help from others he is back racing. Many thanks to Al Lardie and crew
for having us back. 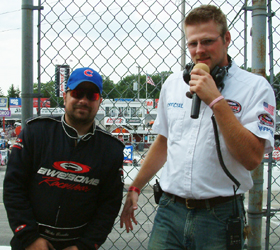 Mother Nature didn’t keep fans from a great night of
racing at Kalamazoo. Our Secretary Treasurer Sue Ginter was on hand to greet
members at our Fan Club table and presented our MARFC Uniform/ Helmet bag to
Late Model # 84 driver Mike Brooks. Mike was chosen because of his
willingness to help fellow racer who was injured in a fiery crash a few
weeks before. He and a few others built a bomber class car to raffle off
with the benefits going to driver Steve Leafdale. Great job guys! Thank you
to Gary & Donna Howe for having us again this year. 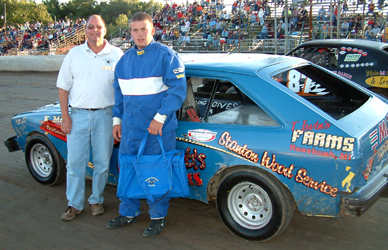 Sunny day & cool evening for our trip to Mt.
Pleasant. Glad to see many new and old members stop by and say Hi! Fantastic
side by side racing all night long. Mini Stock # 7 driver Andy Mogg was
given our MARFC bag for his weekly support of his division and the speedway.
Many thanks to Betty Crook and staff for allowing us into her great facility
again in 2007. To “Shut Up” Roger thanks for the PR job.

Another fantastic night of racing with nearly 100 cars
in the pit area was great. Club members were treated to a Christmas in July
raffle as well as some great racing along with meeting some great local
racing old timers on hand. Figure “8” driver # 09 Billy Earley was awarded
our MARFC bag for his support of his division along with a little hard luck
this season. Many thanks to Ron Drager, Scott Schultz and staff for another
great night of racing.