What a way to start of the racing season with the deaths of two great racers. On Friday May 4th racing legend Stan Perry died during a race at the Spartan Speedway & then the very next night Auto City seen Sprint car driver Scott Seaton loose his life during a race. We here at MARFC send out our deepest sympathies to both the Perry & Seaton families. Once again we know not way God called both these racers home but we must remember they are both safe at his side now. “God Bless & Keep them both”

Thank you to all who took the time to vote. It show’s the great support that our club receives from its members.

THE NEW 2007 MARFC EXECUTIVE BOARD AND BOARD OF DIRECTORS:

I’d like to welcome to our new board members and look forward to working with them. I’d like to thank board member Jack Lecot for his time on the board. Jack was our first board member from Canada who did a great job for us these past two years. Thanks again Jack! One other board member has decided to retire after nearly 40 years on the board. Bill Stone has been one of our greatest board members and has held the office of President for a total of 13 years at different times. Bill is one of the clubs charter members since 1965 and has not missed our annual banquet in the 41 years. He has done an outstanding job with his scheduling of guest speakers over the years. He has also, been our Santa at the annual children’s Christmas party for the past 10 years. With out his help over these past 40 plus years our club would have not continued this long as one of the best racing fan clubs in the country. I take pride in calling him my friend and on behalf of the entire MARFC membership say Congratulations for a job well done and enjoy a long and healthy retirement. “THANKS AGAIN BILL” for everything. 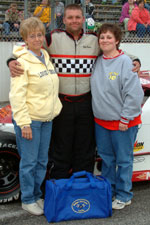 SPARTAN SPEEDWAY: Cool & a little overcast but racing was great. Nice to see many members on hand for this event. We presented Bud Perry with our MARFC Uniform/Helmet Bag during a brief memorial to Stan Perry prior to the evenings racing. We wish to Thank Paul Zimmerman, Jim Leasure and Bill Lackey for a fantastic night. We also wished “Poor” Paul a Happy 83rd Birthday on the same night. Thanks to “Big ED” for the great PR during the night. 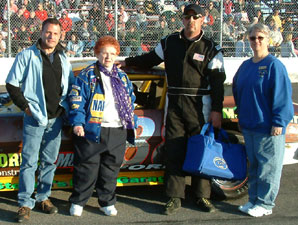 AUTO CITY SPEEDWAY: Another cool night for our members but seen some awesome racing. Board members Cory Russell, Fran Russo and Jeff Moroni were on hand to present our MARFC Uniform/ Helmet Bag to the # 88 Factory Stock driver Kenny Ford. Kenny has had some hard luck here in the start of the season and we hope our bag brings him some luck. Many thanks to Joe DeWitte and the
entire staff of the speedway for having us again this season. 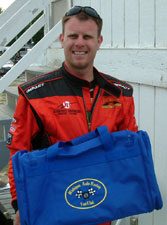 BERLIN RACEWAY: As always what an outstanding facility for us to visit for a racing event. Mike Strevel and crew did a fantastic job for all our members to enjoy some great local short track racing. The MARFC Uniform/Helmet Bag was given to Tom Thomas the 2006 Late Model Champion. Larry & Sue Iacoboni were on hand to greet members at our table. It was great to see and hear the 2006 Tom Carnegie announcer of the year winner Norm Jelsma. Thanks again to the Berlin Raceway for inviting us.