Well it is here racing season is in full swing now and I hope everybody has a great racing season drivers, fans and promoters alike. Lots of information this month so here we go. We need to send a Get Well wish to our old friend Dick Beebe. Dick was in the hospital for awhile last month and is recovery at home as of right now. Here is a Speedy Recovery to you Dick!

Just a reminder to all that we have a few great ways to keep up with what’s going on in racing during the week. For those of you who have access to the internet there is the Michigan Short Track Racing Club at www.mstrc.com to chat with drivers, track officials and other race fans across the state.

Then there are three great radio shows you can listen to for more information. Motor City Motor Sports with host Eddie Sachs Jr. airs Tuesdays at 7:00pm on WSNL 600AM starting on May 1st. Then there is Race Talk Radio with Larry Loynes airs Wednesdays at 7:00pm to 9:00 pm on WNFT AM 1470 and Race Day Review with “Big” Ed Inloes on Sunday mornings 11:00 am to 1:00 pm on WTRX 1330 AM. Don’t forget we have three racing papers to keep you up to date also like MARC TIMES RACING NEWS, MID AMERICANS RACING NEWS and MICHIGAN RACING SCENE. All these shows and trades help support our sport and I think we need to show our thanks by supporting them as often as we can.

As fan club days draw near we could use some extra hands in the way of volunteers to help out at our MARFC table during the start of the night at each track. If you can help out please contact me and let me know at which track you might be able to help out. All help will be greatly appreciated tremendously.

by: Past President Russ Jacobson

Our club Banquets were a special occasion. I remember many great racing personalities honored by the club over the years. The Banquet that stands out to me was the following:

We (the Board of Directors) had a meeting to finalize all the details the weekend before our banquet date at the Imperial House, held at Sam & Fran Russo’s house. When I got home from the meeting, I received a phone call from Vito saying that the Hall had a bad fire. Boy, this news put our board members in a bind, to say the least! With luck, and a lot of work by the board, we found Woody’s Hillcrest Country Club was available for that night, and Woody agreed to honor the Imperial House price. As things turned out, this became one of our better banquets. That night we honored Jim Gillmore as “Michigan’s Man of the Year” and Dick Purtan was the M.C. This was a night, and week that many of us will not forget.

During the 70’s and 80’s, the club gave the honorees a gift instead of a plaque or trophy. Trudy Hall and my wife, Barbara, spent many nights buying and wrapping the gifts. My years with the MARFC were very rewarding. And, on my retiring as President, I was awarded a “lifetime” membership of which I am very proud.

I wish the MARFC officers and Board of Directors, many years of continued success and enjoyment for all members and fans. 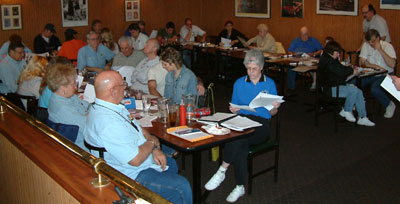 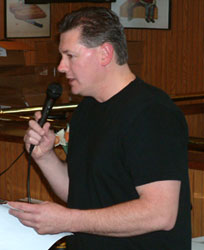 Our April meeting was good even though we were up against the rescheduled ASA race at Toledo and with a couple of tracks opening night on the same night. Our guest speaker was one of our newest club members who started his own business called Stadium Events Todd Hutson. Todd talked about how he plans racing & other sporting events with travel arrangements in a one day deal. He uses great transportation like Deluxe Motor Coach’s for a comfortable ride to and from the events and also has a deal with Hooters Restaurants for some events. He has a deal to go to the Indy 500 for one ticket, the ride down and back and a souvenir hat all for about $ 115.00. We hope to be able to work out an event for our club members to partake of.

Todd has an events schedule listed on his web site for all to see. Check Todd out at www.thestadiumevents.com for more information.