We would like to send out a couple of GET WELL Wishes to club members Steve Russell and to Tony Russo who both were in the hospital last month and could use our thoughts and prayers. Steve is the husband of board member Cory Russell and Tony is the son of long time board member Fran Russo. Get Well Soon to you both! We are also looking for volunteers to help with these events so if you would like to help out please contact me as soon as possible. Once again if you are planning to run for the board you will need to attend our April meeting on the 21st to be nominated and accept it to be voted in. This will be our last meeting until the fall so come on out and be apart of a great night. As always any questions or comments contact me at:

My Association with the Michigan Auto Racing Fan Club

by: Past President Russ Jacobson

My first association with MARFC was in 1964 when I won the Midget feature at Crystal Raceway and Vito LoPiccolo awarded me a transistor radio from MARFC.
My wife, Barbara and I joined the club at that time and we formed a great friendship with Vito & Barbara and many more with other club members. Vito soon asked me to run for the Board of Directors, and I won one of the positions. A few years later, I was nominated for the position of Vice-President. I held that position until Vito retired as President, and I took over that position.

In the early years, the “MARFC Messenger” was sent out of the LoPiccolo’s home. My family would look forward to Vito’s call each month to say the newsletter was ready and we would go to his house where they prepared a nice dinner. After dinner, both families retired to his basement where Barbara had previously typed the newsletter and we all worked to mimeograph, staple, fold, stuff, address, and stamp them. This procedure would go late into the evening and when my family would leave, we took the boxes of newsletters and dropped them into the postal box on the way home. 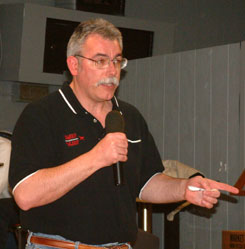 What a great night we had for those who attended. Just before the meeting members were able to see and enjoy thousands of photos and memorabilia on hand during the Old Timers Reunion. Then we had Ron Drager speak about the ARCA Banquet & Tribute to Jack Bowsher, and then show video from banquet as well as a short video of the 1976 race against cancer at Toledo with, Richard Petty, Bobby Allison, Benny Parsons, Cale Yarbrough & Joy Fair who won the race. Then Scott Schultz talked about both tracks and the special events planned for the 2007 racing season. Brian Norton talked about how the set up the Old Timers Reunion, Brian Philips talked about Benny Parsons and his racing collection tribute to him, and we even let Gary Lindhal talked too. 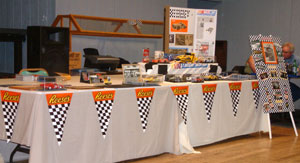