It is time to renew your membership. Thank you to all those who have done so already. If you would like to be apart of our great organization please go to the membership link and join our growing club and enjoy all the perks of being a MARFC member. As always any questions or comments please contact me at: president@marfc.org. 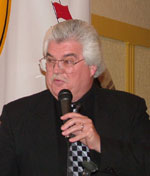 The 40th Annual Michigan Automobile Racing Fan Club Banquet is now part of history. We were blessed with great weather and a nearly sold out banquet.

It was a fantastic time for all who came and supported our club on it’s forty years of existence. Thank you to MIS for sponsoring our banquet tickets this year. We honored all the various champions from our membership tracks and series along with our special awards. Special thanks to Gary Lindahl for the great job as master of ceremonies for the night. Thank you to all who donated items for the banquet and thanks to all who lent a helping hand set up and take down this year. Our Presidents award was presented to “The Michigan International Speedway” with the speedways President Brett Shelton on hand to accept. The old time Michigan Legend Jack Goodwin was given the MARFC/Eddie Sachs Memorial Lifetime Achievement Award by Eddie Sachs Jr. and myself. Larry Loynes was on hand to receive the MARFC Electronic Media Award for his radio show “Race Talk” on WFNT 1470 AM radio and our Motorsports Writer of the Year Award was presented to Bob Capps for his many articles in various racing publications. 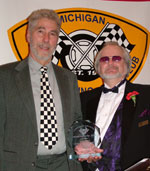 Our Special surprise awards were also given out and they went to the following. MARFC Promoter of the Year went to the Crystal Motor Speedway and Ron Flinn. The MARFC Mechanic of the Year went to Richie Lee who built both championship winning motors in the figure “8” divisions at Flat Rock & Toledo Speedways. Dennis Trinklein was presented the MARFC Fan of the Year that is sponsored by Jim’s Industrial Catering and boy was he totally surprised. Other appreciation awards were presented to: Paul Anton, Sterling Printing & Graphics, and the Imperial House Banquet Hall. A very special appreciation award was given to Jay Woolworth who personally signed up the most new members for 2005. 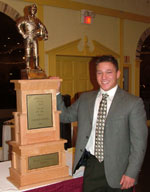 Up next Ron Drager President of the Michigan Speedways Promoters Association presented their 2005 Promoter of the year Award to the Berlin Raceway with Mike Strevel on hand to accept the award. Then it was Terry Fitzwater’s turn at the mic to present his awards. First up was the Tom Carnegie Announcer of the Year Award. With the help of the first Announcer of the Year Award winner Gary Lindahl they called the name of Leo “The Chief” Pego and boy Leo was big time surprised. Then Terry presented the Michigan Racing Scene Driver of the Year Award to young Cameron Dodson. Cameron thanked a lot of those who helped get him were he is today and where he is heading in the future.

Then the board of Directors of MARFC surprised me with a special made 40th Anniversary MARFC Racing jacket that I am so proud to wear. Thanks to all of them because what I get credit for is truly not just me but our entire board who makes this organization work and grow. Thanks again to them all! Thanks to the following past award winners for coming to our

banquet. Herb Fishel & Sandy Heng-Fishel, Bob Studt, Joy Fair and Stan Yee Sr. It was also announced by Vito LoPiccolo that MOTOR CITY MOTOR SPORTS will be back on the air starting on April 15 from 6pm-7pm on AM 1500 and AM 600 with it’s new owner & host Eddie Sachs Jr. We will have more information later or you can check out www.motorcitymotorsports.net for additional information. Once again Congratulations to all the champions and award winners. Hope to see you all again next year.

Willis Flokstra, a charter member and founding MARFC board member pays tribute to the club and fellow founders at the club’s 40th Anniversary Awards Banquet.

40 years & 4 months ago, my wife Marian & I received a phone call from Bob Lewis, who was a very good friend and columnist for several different racing papers.  Bob invited us to come to his house the following Saturday afternoon to meet with a couple that was coming up from Detroit to discuss the possibility of forming an auto racing fan club in the state of Michigan.  The only information we were given about this couple is that he was a cop in Detroit and an avid race fan.

On our arrival we were greeted by Bob & his wife Norma (both of whom have subsequently passed away) and introduced to Vito & Barbara LoPiccolo.  The meeting that took place that afternoon in Grand Rapids turned out to be the l meeting of the Michigan Auto Racing Fan Club.

At that time, the racing fraternity was mourning the recent loss of 2 of our finest competitors in this area, Dick Carter & Jimmy Nelson, both of whom were killed in racing accidents in West Michigan in 1965.  We had previously discussed the idea of a Fan Club with Bob, and he had mentioned the idea in some of his writings. Vito read one of Bob’s columns and contacted him, feeling also that the time was right for establishing such a Club, where fans could assemble and fraternize during the “off-season” as well as during the racing season.

The meeting then went on and we discussed many things, among them being what the club would be named, the election of officers and a Board of Directors, a goal and motto, a logo, time place & frequency of meetings, a constitution, as well as recruitment of members.  As a result of all of our discussion, Vito was chosen to be the President of the Club, a position that he held proudly for many years.  His wife Barbara was chosen to be Secretary-Treasurer, serving well and faithfully for several terms until business pressures forced her to resign.  I was named to the Board of Directors, which would be filled as membership increased.  The Club motto was established as “Dedicated to the betterment & benefit of auto racing & those engaged therein”.  The goal was to be a support to each other and to others in the fraternity that might be in need, financially if possible, but more importantly mentally, psychologically, and spiritually.  I still remember Vito’s words as our meeting was winding down — “As of now there is a Michigan Auto Racing Fan Club even if we never have any more members than the 6 of us”.

Vito and Barb worked extremely hard to establish a dedicated and hard-working membership, and soon the Club had grown from 6 members to over 1000 active members.  Vito was a real recruiter, and there4 are stories of him going up to friends, relatives, and co-workers saying “Gimme 5 bucks”.  Those that did, he would hand a piece of paper and say “Write down your name and address for me, and by the way, congratulations, you are now a member of the Michigan Auto Racing Fan Club.”  It is also rumored that he signed up at least 1 member who was a total stranger to him that he stopped for a traffic violation while on patrol.  Charter members signed up by Vito included some real racing legends, among them Maury Rose, Carl Forberg, and Peter DePaolo.

At this time I would also like to pay tribute to a man that I believe is the only person who has attended every one of these affairs for the past 40 years.  A charter member who has served faithfully as a member of the Board of Directors, as vice-president, or as president for all of these 40 years, Bill Stone. Stand up and take a bow, Billy!

When I look at this great gathering tonight, it makes me think of some of the “greats” in auto racing that have honored us with their presence at this banquet over the past 40 years, names such as Mike Eddy, Russ Jacobson, Benny Parsons, Fred Campbell, Bobby Unser, Kris Patterson, Stan Yee, Joe Falls, Gordon Johncock, Bob Jenkins, Shirley Muldowney, Howdy Holmes, Butch Miller, Dan Gurney, Ed Howe, Pat Vidan, Little Richard Simmons, and last year although via tape due to ill health, the great Tom Carnegie.  Where do we stop with such a list of celebrities?

MARFC may not have always been the biggest Fan Club of its’ kind, but since its’ founding on September 25, 1965 it has always maintained its’ status as the most pretigious.

All of this would not have possible without the dedication and many years of hard work put in by the couple that I consider to be “the mother & father” of the MARFC, our President and Secretary-Treasurer.  Barbara is unable to be with us tonight, but at this time I would like you to come to your feet and give a great big round of applause for my dear friends of over 40 years, Vito & Barbara LoPiccolo!