We hear at MARFC were saddened by the news of the passing of one of our members. Sharon Goulette lost her long battle with cancer last month. Her husband Dan Goulette and the rest of her family are in our thoughts and prayers. She will be missed greatly by all who knew her.

Next off I’d like to thank the Auto City Speedway for sponsoring our ticket printing for this years banquet. However I apologize to them for misprinting their opening date on the back of the ticket. It should be April16th, 2005 not the 26th. It was my mistake and I am truly sorry.  January 21, 2006 will be the date of our 40th Annual Award Banquet is mark it down now!

What a great night it turned out to be for our 39th Annual Awards Banquet.  Weather was a little cool but snow free were we. With nearly 400 folks on hand it was a night to remember. The Imperial House once again did an outstanding job with all the great food and fantastic service for our banquet. We thank them greatly for all they have done for our club with being the Official Banquet Hall for MARFC.

To have club members and long time friends Robin & Lynette Metdepenningen attend all the way from Mooresville, NC was fantastic. Frank Kimmel was also  on hand to receive his 6th award from our club and said that he was glad to be able to make it this year. Thank you to the following for having their championship cars on display during our banquet: Chuck Silva and Gorilla Racing Modified from Auto City Speedway, Eric Lee & Lee Motorsports Late Model from the Flat Rock Speedway, Dustin Daggett Racing for the SOD Sprints and the Ferns Racing Team for ¼ Midget car. Thanks again to you all.

Your membership renewal for 2005 must be turned in by February 22, 2005 or you will be dropped from our mail list as the cost of postage and printing is high and we need to cut expenses where we can. If you have already renewed your membership your 2005 cards will be in next months newsletter.  Don’t forget about our contest to help us with our membership. The current 2005 member who refers the most new members to sign up in 2005 will receive their 2006 membership & MARFC prize pack free from us here at MARFC. I will have more information on the prize pack in the upcoming newsletters. The new members must refer using your name in writing at the time of membership signup.

In addition to the photos below, an album of the entire event can be viewed here. 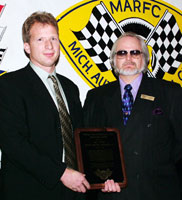 The MARFC Presidents Award for 2004 was presented to Ed Howe & Howe Racing Enterprises. Son Chas was there to accept for Ed as Ed is now semi-retired and lives in Florida now.

Gary was very happy to receive this honor.

Greg Yost host of “Race Day Review” picked up our Michigan Electronic Media Award for all his fine work supporting our sport through his radio show each and every Sunday morning. Greg thanks everyone and said that he couldn’t of done it without his partner on the show Jay Woolworth and also having his family’s support. Paul Anton accepted the Motorsports Publication of the Year Award for Mid-American Auto Racing News. Paul thanked the club on behalf of the paper. Our Surprise awards went as follows: 2004 MARFC Fan of the Year was a big surprise to one of our Canadian member Jack Lecot. Thanks to Jim’s Industrial Catering for sponsoring this award. Jason Fausey. promoter of the SOD Sprint Car Series won the 2004 MARFC Promoter of the Year. The 2004 MARFC Mechanic of the Year went to 3-time ARCA Truck Champion crew chief Chuck Carroll. MARFC Appreciation Awards went out to all these great folks who worked hard over the last few years to help our club grow like it has. They were: Larry Iacoboni, Dave DeHem, Jeff, Morini, Al Peltier, Cory Russell, Fran Russo, Laura Tucker, and Bill Walters. Way to go to them all. 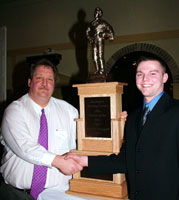 Publisher & Editor of the Michigan Racing Scene Terry Fitzwater was on hand to present a couple of awards. Tom Carnegie was unable to be with us at the last minute because the Doctors gave him the red flag to stay home and get well for his up coming 60th Indy 500 race. But he did sent along a special video to announce the new award winner of the first Michigan Racing Scene/Tom Carnegie Announcer of the Year to Gary Lindahl who was speechless for the first time in his history. What a great surprise to Gary and he is well deserving of it and to be the first to receive this new award is outstanding. SOD Sprint Series Champion Dustin Daggett won the MRS Driver of the Year Award for 2004. Dustin beat out many other great drivers to achieve this honor and was very grateful. 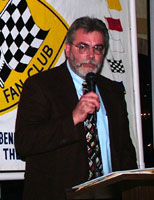 Ron Drager the President of the Michigan Speedways Promoters Association was in attendance to present the MSPA Promoter of the Year to the late Dick Crook co-owner of the Mt. Pleasant Speedway. Announcer Leo Pego was there to say thank you on behalf of the Crook family. Also, a very special thank you to Paul Anton for once again taking all the great photos during our banquet.