support our club by buying or selling our annual fund-raiser raffle tickets.  Once again we beat last years goal with your help. Congratulations to the winners! First prize went to Amy Lukowski from Bay City, MI with second prize going to Dennis Pulte of Saint Clair, MI and third place going to Rich Davison of Clinton Twp., MI. Our in house winner for the evening was Jerry Borkowski of Chesterfield, MI. who received a ARCA Flat Rock Speedway 50 year coin. Special thanks to the Spartan & Calhoun County Speedways for the donation of printing our raffle tickets this year. With all this great support this is way we are continuing to grow as a club. Way to Go Everyone!

Get well wishes once again to Debbie Majchrzak and also to Sharon Goulette both members have been very ill for a long time and are in need of our thoughts and prayers for a speedy recovery.

It’s renewal time so get your 2005 memberships sent in now you will not want to miss any of the events coming up for next season. 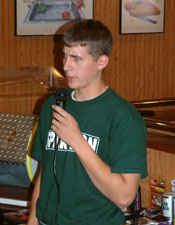 at the time. Bill has raced in three different divisions in the past year and a half. Racing the legends car, sportsman car at the Toledo Speedway and the ever-popular enduro’s.  He hopes to be able to race in the ARCA RE/Max series in 2005 with the car that his Dad bought late this year. Tracy was unable to be with us but Bill did an outstanding job even if the boss wasn’t there. 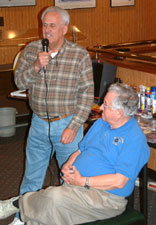 Next we had a few of our members like Bill Stone and myself give a little roast to the host of "Motor City Motorsports" Vito LoPiccolo who was on hand but, as usual Vito took over the mic and told some great stories of his 26 years of being on the air with his show. Great to have Vito around his stories are always funny. 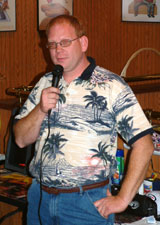 Jeff Metdepenningen was our finial speaker and informed us about how he got started in racing with his Father then all his brothers before him. Jeff has three older brothers there is Robin, Dennis, and Chris who all have raced at one time or another. All of them started at Mt. Clemens Race Track and from there they went all across the country following ARCA with Robin and Dennis and then racing go-karts with brother Chris and also racing Hobby Stocks and Mt. Clemens and the Flat Rock.  Jeff now races a hand full of times each year in the enduro’s across the state and mainly at Flat Rock where his has two victories. He also works on the late model of Arnold Kirsch each week at Flat Rock. Jeff said that racing is a family affair for all the Metdepenningen’s seeing that the third generation is now racing with his son and Dennis’s son.

Greg Studt was scheduled to be with us but was involved in a minor car accident on the way to the meeting but called to say he was Ok and he would try to be with us again soon. Glad Greg is Ok!