It’s that time of year again. You can just about smell the racing fuel and the tire smoke. What a feeling that is and I just can’t wait for it to begin. Hope everyone is ready for a great 2003 season. I do wish that all of you have a safe and victorious racing season.

Let us not forget about our troops who fight for us to have the right to do what we love to do. May we all pray for them and their families. Pray that peace would be here soon. No matter if you agree or disagree with what is going on you must still support our troops as they do the job that they have signed up to do. May God Bless and bring them home soon.

On March 8, The Motor City Meltdown was held at the Michigan State Fair Coliseum in Detroit.  Many fan club members came together to assist with staffing the event promoted by The Michigan Legend Series and Auto City Speedway.

Above:  The fan Club’s own Dave DeHem (#45) rounds turns 3 and 4 of the tight indoor track.  Dave earned his very first Legend Series race win that night. 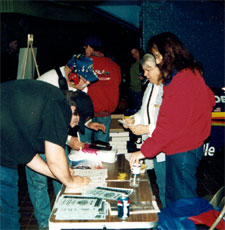 SIGN ME UP!!  Along with helping to staff the event, other members were on hand to help sign up new members.

March was make up Month for the February Meeting that was cancelled due to bad weather, and the Motorsports Hall of Fame & Museum in Novi, Michigan was a great location for it with well over 50 people attending. 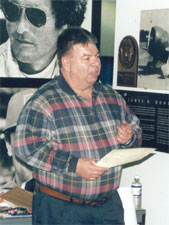 First up was Bill Lackey from the Spartan & New Calhoun County Speedways informing us of all the new events and things that will go on at both tracks this season. They are working hard at getting Calhoun ready for opening day. 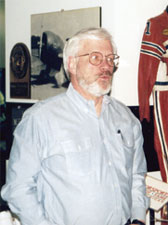 Al Blixt Jr. came up from Ann Arbor to tell us about the book he and his son are working on that is about racing from the old Motor City Speedway & Mt. Clemens Race Track days. He has over a thousand photos that his father Al Sr. took that will make for the basis of the book. 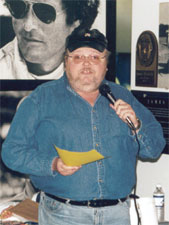 Greg Yost from the Auto City Speedway talked about the new Good Neighbor nights at the speedway that will allow certain neighbor hoods in free the night that they are schedule for. Just another way of giving back to the community that helped make Auto City what it is today. 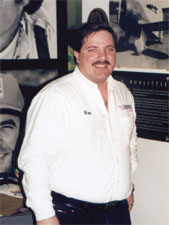 Ron Varney Jr. informed us about his venture in organizing a new race series called USPRO Racing. He has over 25 teams already signed up and has nearly a dozen races schedule at this time with more pending. 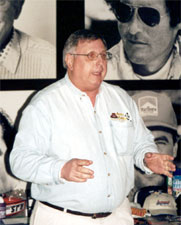 Next up was John Turnbull Sr. who along with Greg Yost gave a very strong thank you to all of the MARFC members who assisted at the Motor City Meltdown event at the State Fair Coliseum last month. John also informed us of the full 22-race schedule that the Michigan Legends have for 2003. They have a great field of cars and a great rookie class for this year. John let us know that their race on September 12th at the Whittemore Speedway will now be called the Drew Simmons Memorial race in tribute to Drew. 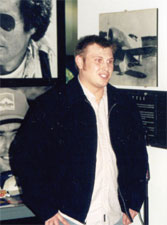 We also had John Turnbull Jr. on hand and told us of his past racing endeavors and about his new late model and ARCA Re/Max Series events he will race in 2003. 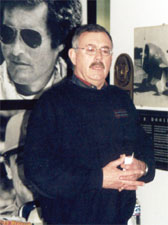 Ron Watson President of the Hall of Fame told us all about the Museum. He also told us about how to become a volunteer at the Museum and the perks of being a volunteer. Special thanks to Ron for allowing us to use the meeting room and tour the museum for the evening.