I hope everyone had a Very Merry Christmas and a Fantastic New Year. Another year has gone by and what a year it was. Congratulations to all the new track champions and may the up coming year bring us even more exciting and competitive racing and crown new champions. We need to take a minute and remember those who we have lost this year and remember their families in our prayers.

Our 35th Annual Dinner Dance & Awards Banquet will be on January 20, 2001.  Some of the Special Award winners are Ron Drager President of ARCA and owner of the Flat Rock & Toledo Speedways will receive the MARFC Personality of the Year Award. We also, have Sandy Heng reporter from WXYZ-TV channel 7 news who covers many auto racing events and does pit side reporting. She will receive the MARFC Motorsports Electronic Media Award.

Bob Studt will be presented the Lifetime Achievement Award for his over 25 years of racing and his total of 18 ARCA championships. Bob has now formally retired from competition and now is car owner for his son Greg. Our Motorsports Writer of the Year is Mike Pryson of the Jackson Citizen Patriot. Mike covers a lot of local racing in that area as well as all NASCAR and Indy car races at Michigan. 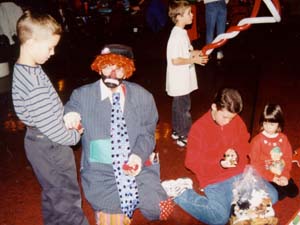 Lower L-Da the Clown put on a wonderful show of magic and balloon sculpting for the little ones.  Again, they waited patiently (ya right). Lower R-Finally the moment we all awaited Santa had finally arrived!! 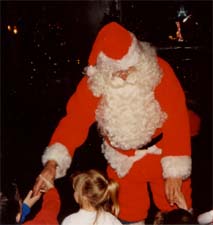 Children of MARFC members were once again treated to a delightful day of fun, games, and presents as we arranged for a special visit from Santa.  Willy and Da the clowns kept us all entertained while we awaited Santa’s arrival.  Parents listened intently as the boys and girls added to their already bulging Christmas lists.