Our thanks to Bob Keselowski, Jack Goodwin for speaking at our October Meeting. 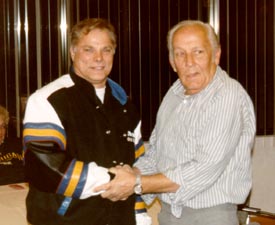 Jack spoke of racing in days gone by and stating that if he were to do it all over again he would not race on the days he got hurt.

By contrast, Bob looked to the future talking about the 2000 racing season and plans K Automotive has for their NASCAR Craftsman Truck Series teams.