We just learned of the passing of long lifetime member Charlene Palmer. She was 78 years of age when she passed near the end of this past February. Charlene was the wife on former board member Bill Palmer who also was AKA “Willie the Clown” for many years for our annual children’s Christmas parties. She & Bill spent many years supporting our club with raffle sales and membership drives as well attending many meetings throughout the years. Always with a smile on her face and a big welcome when I stopped by to see Bill in the later years before his passing. Our thoughts are with her family as the deal with their loss. Knowing she is with Bill and in the Lord’s, care will help with pain of missing her. Rest in Peace! 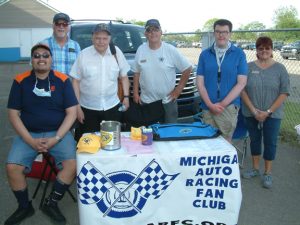 Sunny skies and very warm temperatures greeted MARFC fans at our annual fan club day event at the Flat Rock Speedway. Plenty of racing action for all race fans young & old who attended that evening. Street Stock driver #5 James Pankow was presented our MARFC Uniform/ Helmet Bag for the many years of dedicated racing support of the speedway and winning his first ever “A” Main feature the week before. Great job James! Thanks to Ron Drager & Scott Schultz for having us back again this season. Special thanks to Gary Lindahl and Rich Frantz for all the PR about the club all evening. Our MARFC raffle winner was Lynn Kurin who just signed up the week before at Owosso. Many thanks to all our table helpers for the evening and they were: John Jackson, Jeff Horan, Paul Anton, Bob Ryder, Spencer Nelson, David Howe, Nancy May, and Rand Thompson. Looking forward to next season!( Photo Top Left: Jeff Horan, Bob Ryder, Paul Anton, John Jackson, Spencer Nelson & Nancy May) (Photo Top Right: Melissa Pankow, youngest Pankow, Nancy May, John Jackson, Little Pankow, James Pankow, Spencer Nelson & David Howe) (Photo Bottom: James & Lynn Kurin) 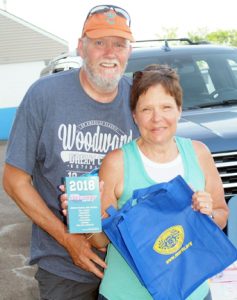 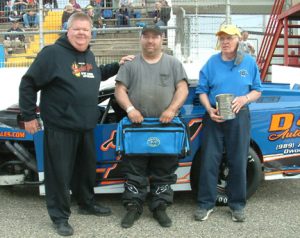 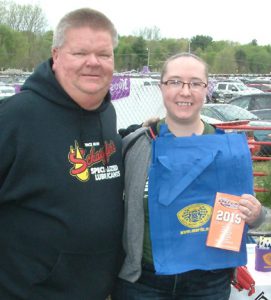 A perfect night for racing as the Owosso Speedway hosted the first of our MARFC Fan Club Day Events for the 2021 season. With all protocols in place fans gathered for a great night of racing. Our MARFC Uniform/Helmet bag was presented to Modified driver Chris Begg #x17. Chris was three-time Sportsman champion, and this is his second year in the modified. He also been a longtime track supporter helping anyone who needed it and promoting the  track whenever he can. Brittney Sprague was the winner of our MARFC raffle that evening. Many thanks to Ken & Jerry Williams and the entire staff for having us in on their opening night. A big thank you to “Big” Ed for all the great PR during our event. MARFC table volunteers were David & Eldora Howe, John Jackson, Doug Jakeway, and Robert Dickey. (Photo Top Left: David Howe, Chris Begg & Doug Jakeway) (Photo Top Right: David Howe & Brittney Sprague)(Photo Bottom: John Jackson, Doug Jakeway, Sean & Brittney Sprague) 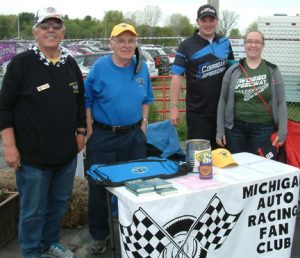 Wishing all the Mothers out there a Very Happy Mother’s Day! May this day bring you Joy, Love and Happiness. For all those who cannot be with Mom this year I encourage you to contact her via, phone, e-mail online or zoom to let her know how much she means to you. I come from a racing family and my Mom knew sometimes it was best for her to take a back seat during racing season but, she supported us all no matter what we were into. She is not with us anymore as she is in her heavenly home still watching over us always. For others like me who’s mothers are also in heaven take the time to remember her on this day and all through out the year as memories are always here to recall. Once again from all of us here at MARFC a wonderful Mother’s Day to you all!