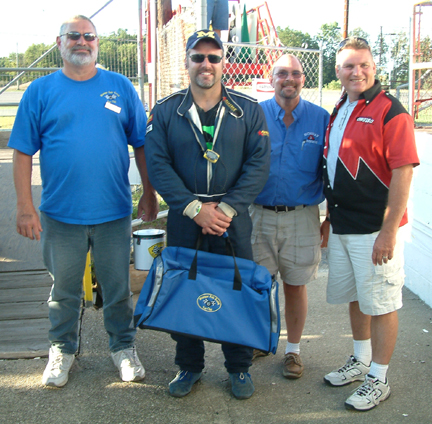 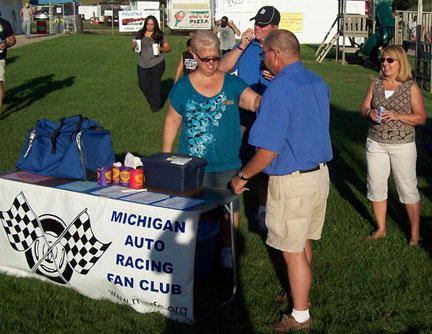 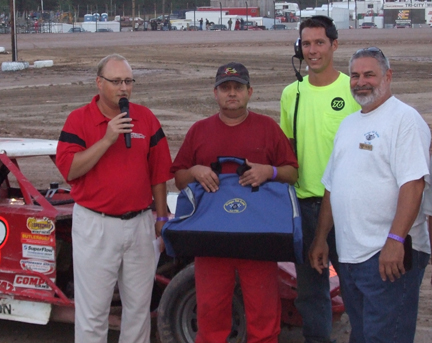 August 26th took the club back to a venue that we haven’t been at since 2004; in fact, nobody has been at the venue since 2004 as Tri-City has been shut down since then. However, The Puvalowski Brothers have done a fantastic job at raising the Phoenix from the ashes and have completely revamped, redesigned and recreated the Tri City Speedway in Auburn, Michigan. While the famed and historic 5/8 Mile 5 turn Trick Track still remains, the real deal at this rejuvenated speedway is the 3/8 mile dirt track that fills the infield where the old high banked quarter mile used to be. Denny Trinklein, along with Barry Meschke, Larry and Kenny Letts , and Becca Pingel worked our MARFC membership table and were there to present the MARFC Helmet bag to the Driver of the #776 Late Model, Rusty Ziegler with assistance from track announcer Roger “Shut Up” Williams. Our MARFC Member prize winner was Gordon Wallace. Our members had a great night of racing that saw the first ever figure 8 race at the trick track of the world, the Tri City Speedway. Many Thanks to the Puvalowski’s for not only hosting our MARFC Members  but also for having the courage and fortitude to do what they have done in these tough economic times and basically build a new race track. All reports say that standing room only crowds are the norm and the racing is better and better each week.

Auto City Speedway Well, dog gone it anyways. Mother Nature decided that this wasn’t going to happen this time either and wouldn’t you know it. It rained out again. This event has been re-scheduled for September 17, 2011

August 19, 2011 Michigan International Speedway MARFC Members were once again treated to a day at the big 2 mile oval in the beautiful Irish Hills. Members were able to watch practice in the upper NASCAR Divisions as well as Sprint Cup Qualifying. This mid August event is always well attended and is a great day for our members to roam around the speedway and seek out some different vantage points to watch the racing from. Many thanks to the staff at Michigan International Speedway and Roger Curtis, Dennis Worden, and Sammy Lukaskiewicz.