The entire Board of Directors of MARFC wishes to send each of you the best for this Holiday Season. May the Good Lord Bless and Keep us all safe through out the holidays and all through the 2005 racing season.

The Michigan Automobile Racing Fan Club will host the 39th Annual Dinner Dance & Awards Banquet on January 15, 2005 at the Imperial House Banquet Hall located in Clinton Township, Michigan at 5:30pm. Our club will honor many Champions from across the state from various forms of auto racing. The Presidents Award will go the legendary Ed Howe & Howe Racing Enterprises for the many years of service they have given many of the local racers not only here in Michigan but across the country. Gary Fedewa will receive the MARFC/Eddie Sachs Memorial Lifetime Achievement Award for 2004. With his many victories and many championships Gary is most worthy of this honor. Eddie Sachs Jr. will assist in this presentation.

Mid-American Auto Racing News will receive the Motorsports Publication of the Year. The MARFC Electronic Media Award for 2004 will be "Race Day Review" with the host Greg Yost on WTRX Sports AM 1330. Greg has done an outstanding job each and every week and this award is well earned. We will have many surprise awards to pass out on this great evening. Mr. Terry Fitzwater will also be with us to present the Michigan Racing Scene Driver of the Year Award as well as the first Tom Cargnie Announcer of the Year Award. The voice of the Indy 500 is also scheduled to be with us to help present this great award.

The Michigan Speedways Promoters Association will award their annual Promoter of the Year award to one of Michigan’s outstanding promoters. This is just a little of what will be happening at this fabulous event. So if you would like to attend you can contact me for ticket information. It will give you the chance to see and meet all the fantastic champions from all the tracks and series so come on out and enjoy the evening

We would like to thank the Auto City Speedway for sponsoring our ticket printing. On the back the opening day date is April 16, 2005 a misprint that I apologies for on my part. Any questions or for more information contact me a president @marfc.org.

Don’t forget it’s time to renew your membership for 2005! 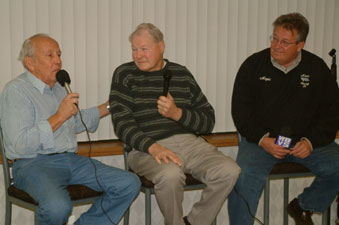 What a great night we had with all our special guests. With Joy Fair, Dick Barker and our old friend Jack Goodwin. Many great stories were told and all three took turns answering questions from all the members on hand. Joy and Jack told us of the old days when drivers and teams would run up to seven to eight times a week. Dick informed us of the current cost of racing compared to when Jack & Joy ran many years ago. If you didn’t attend this meeting you missed a very special night these guys could have gone on for hours and hours. Later we had some old video footage of the Mt. Clemens Race Track when it was dirt and during the later years. All three guests did say that the old girl is missed greatly.